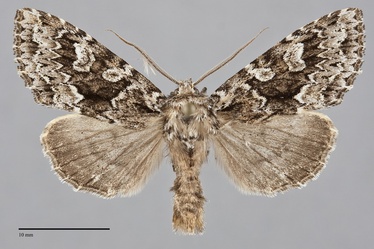 Platypolia anceps is a medium-sized to large moth (FW length 18–20 mm) that flies in boreal forests and the Oregon Cascades during the fall. It has slightly mottled, brownish-gray forewings with large pale-filled spots, serrate lines, and a black median bar. The forewing outer margin is slightly scalloped. The median area and costal subterminal area are medium to dark brownish gray. The wing base and terminal are similar color but lighter and more powdery, while the subterminal area is palest and relatively smooth. A short black basal dash is present and there is a black bar across the median area in the fold. Dark gray shading is present in the medial terminal area opposite the cell and in the fold. The basal and antemedial lines are dark gray and black filled with white, irregular. The antemedial line is angled toward the outer margin and is most irregular near the posterior margin. The median line is black, diffuse, usually thin. The postmedial line has black inner and white outer components, thickest in the fold; is very sharply toothed toward the outer margin on the veins and towards the base in the fold; drawn toward the base on the costa, bent basad at the level of the anterior cell, and is strongly angled toward the base and only weakly convex from the bend to the posterior margin. The subterminal line is white or pale gray, thin and diffuse, irregular with a relatively weak W-mark on the mid-wing. It is preceded by a series of small sharply-defined black chevrons at the apex and posterior to M2. A terminal line of black triangles is present at the base of the checkered gray fringe. All three spots are outlined by thin black lines. The orbicular spot is moderate-sized, oval, filled with white or light gray and a dark ocellus. The reniform spot is moderate to large, broadly kidney-shaped and often asymmetric with extension of the anterior end toward the apex and sometimes with a tooth-like extension toward the base from the posteromedial end, filled with white and medium gray and a thin gray central crescent. The claviform spot is moderately large, fused to the median bar. The hindwing is slightly brownish gray, with darker ill-defined discal spot, postmedial line, and submarginal band, and a thin dark terminal line. The hindwing fringe is white with a gray base. The head and thorax are hoary brownish gray with dark lines and powdery light edges on the collar and tegulae. The male antenna is bipectinate, appearing moderately wide to the naked eye.

This species can be recognized by its fall flight, dark gray forewing with relatively even lighter subterminal area with small chevrons at the subterminal line but no dark shading below the costa. Males are most easily distinguished from other Platypolia species by their wide bipectinate antennae. Females can be difficult to differentiate from light females of Platypolia contadina. They tend to be slightly brownish rather than gray without any warm tints, like P. contadina, have an elongated anterolateral reniform spot, and less dark shading in the subterminal and terminal areas. Platypolia species, including P. anceps, can be distinguished from Xylotype arcadia by the lack of a long black anal dash.

This species is widely distributed in moist forests across North America.

Platypolia anceps is found in British Columbia, likely north to the Yukon border. It has also been collected in the Cascade Range of northern Oregon.

This moth is widespread across boreal North America, mostly across Canada but ranging south to the northern parts of the Great Lakes States and New England. It occurs further south to North Carolina and Colorado in the mountains.

No information is presently available regarding larval foodplants of this species, but it is probably a generalist feeding on many kinds of hardwoods based upon closely related species.

This species flies during the fall, usually in September and early October. It is nocturnal and comes to lights.