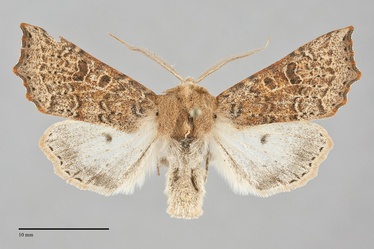 Perigonica tertia is a medium-sized (FW length 17 – 19 mm), orange-brown moth that flies in oak forests during the spring. It has an angulated forewing outer margin and wide bipectinate male antenna. The forewing is medium-dark orange-brown with variable dark mottling. The outer margin is pointed at the apex, on vein M3, and weakly on CuA2. The veins are slightly lighter on the distal wing in some specimens. The forewing lines are similar dark with slightly lighter filling than the ground color. The basal and antemedial lines are fairly inconspicuous, but the postmedial line is more prominent and is followed by a series of double dark spots on the veins in most dark specimens and some lighter individuals. The shape of the postmedial line is undulating lateral to the reniform spot and weakly concave toward the base posterior to the spot. The pale subterminal line is complete and is slightly irregular, often weakly zig-zag across the distal wing. The median line is usually absent, but is weakly evident as a gray to dark orange-brown line at the costa in some specimens. The terminal line is a series of gray spots between the veins. The fringe is orange-brown and gray. The orbicular and reniform spots are light. The circular orbicular spot is usually filled with the ground color, less often gray. The kidney-shaped reniform spot is more often filled with gray and less often with the ground. The claviform spot is absent. The hindwing is light whitish gray with dark gray suffusion on the outer third, dark gray small discal spot and thin terminal line, and a whitish to light orange fringe. The head and thorax are uniform colored similar to the forewing, without interspersed dark gray scales. The eye is covered with fine hairs. The male antenna is strongly bipectinate.

This species is similar in color and pattern to Orthosia ferrigera which also flies in oak forests during the spring. The outer margin of this species is scalloped but not angulated, unlike that of P. tertia. Perigonica angulata is similar to P. tertia in wing shape and pattern. Males of these species are easily distinguished by the width of their antennae, widely bipectinate in P. tertia and biserrate in P. angulata. Females of these species can be differentiated by color, usually appearing more yellowish in P. angulata and orange in P. tertia. The median line of P. tertia is usually weak, whereas that of P. angulata is evident at the costa or is dark across the entire wing. Finally, the scales on the dorsal thorax of P. tertia are usually uniform reddish while those of P. angulata are mixed yellow-brown and gray (visible under magnification).

This species is endemic to oak forests along the West Coast.  In the Pacific Northwest, it is common to abundant in oak savanna, oak woodlands, and in mixed hardwood forests with oaks at low elevations west of the Cascades, and in oak woodlands along the east slope of the Cascades.  This species is considered to be management sensitive, depending on oaks as a larval foodplant.

Perigonica tertia is closely associated with oaks in the Pacfic Northwest. It is common and widespread in western Oregon, in the Columbia Gorge, and along the east slope of the Cascades from Wasco County, Oregon to Klickitat County, Washington. It is less commonly found in western Washington and southwestern British Columbia but occurs as far north as Vancouver Island.

The range of P. tertia extends south to the Mexican border through California. It is most common along the Pacific Coast but also occurs in the northern Sierra Nevada.

This species is a foodplant specialist feeding on deciduous oaks (Quercus spp.) in the Fagaceae.  In the Pacific Northwest, the primary larval foodplant in Oregon white oak (Q. garryana).

The adults are single brooded and fly during the spring. They have been collected during March, April, and May in our region. This species is nocturnal and comes to lights.