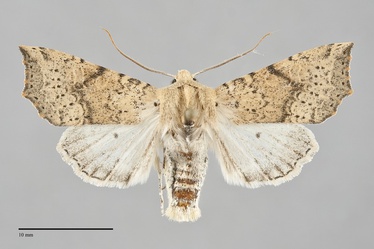 Perigonica angulata is a medium-sized (FW length 16 - 18 mm) moth that flies in western Oregon and the southern Washington Cascades during the spring. It has an angular yellow-brown forewing variably marked with gray, and a biserrate male antenna. The forewing ground color is even light ochre-brown, nearly immaculate to variably marked with gray. Some specimens have a slight orange cast or have a salt-and-pepper look due to a heavy suffusion of dark scales. The outer margin is angular, with a pointed apex, accentuated by dark gray at the fringe, and a second point on vein M3. The median line is dark gray and complete in dark specimens and evident at the costa in lighter ones. The basal and antemedial lines are gray, double, filled with slightly lighter color than the ground, and with several adjacent gray dots on the veins. The postmedial line is similar but more prominent due to a series of double dark gray spots on the veins lateral to the line. The pale even subterminal line is preceded by a gray shade in darkly marked individuals. The orbicular and reniform spots are lighter than the ground and are filled with the ground color except for the lower reniform which is filled with gray in specimens with a dark median line. The claviform spot is absent. The hindwing is whitish gray with a light suffusion of dark gray on the outer third, a round dark discal spot, and a thin dark terminal line. The fringe is white to light gray. The head and thorax match the forewing, usually with scattered dark gray scales that are evident with magnification. The eye is covered with fine hairs. The male antenna is strongly biserrate.

This species is most likely to be confused with Perigonica tertia in our area. The males are easily separated by the width of the antennae, biserrate in P. angulata and strongly bipectinate in P. tertia. Perigonica tertia is similarly patterned and has a similar wing shape. It is more orange in color and its median line is weak or absent. The thorax is orange-brown with few dark scales unlike the ochre thorax of P. angulata that has scattered dark gray scales.

Larva is smooth, green to yellow with faint dark mottled specks.  It is illustrated by Miller & Hammond (2003).

This species is common to abundant along the West Coast in forests with evergreen Fagaceae.  In the Pacific Northwest, it is found in mixed conifer-hardwood forests of the Siskiyou region in southwestern Oregon at low to middle elevations, in shrublands on rocky, serpentine ridgetops at high elevations in the Siskiyou Mountains, in coastal rainforests of the Coast Range and along the west slope of the Cascades, in mixed hardwood-conifer forests at high elevations along the summit of the Cascades, and in open ponderosa pine forests along the east slope of the Cascades.  This species is considered to be management sensitive, depending on live oaks and chinquapin as larval foodplants.

Perigonica angulata is found in the Cascade Range as far north as Skamania County, Washington where it is associated with one of the two known stands of chinquapin oak in the state. It is more widespread in western Oregon where it occurs in the Siskiyou Mountains and southern Willamette Valley as well as in the Cascade Mountains.

The range of this species extends south through California and east in the Southwest to New Mexico.

The adults fly in early spring from late March to early June. They are nocturnal and come to lights.