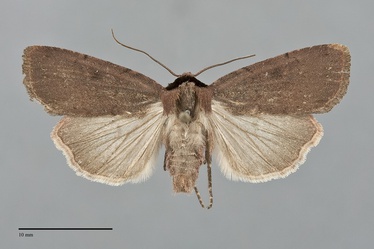 Adelphagrotis carissima is an extremely rare species in collections and is known from only five specimens, one of which is from Oregon. It is a medium-sized (FW length 16 mm in the single Northwest specimen) broad-winged plain brown to dull red-brown moth with a broad black collar. The forewing lines are barely evident, except at the costal margin. The orbicular and reniform spots are evident only as slightly lighter filling, and the cell between them is slightly darker than the rest of the wing. The hindwing is gray, slightly darker near the margin with a lighter gray fringe. The head and thorax match the forewing color except at the broad black collar.

This species can be identified by its plain brown appearance and broad black collar. It is most likely to be confused with Parabagrotis formalis which has a similar thick collar but lacks the forewing pattern of that species. The red form of Parabagrotis insularis has a more similar forewing color and pattern but lacks the black collar. Other species with thick black collars lack the combination of red-brown color with obscure markings.

Specimens from California are more reddish brown than the single Oregon specimen but are otherwise similar.

This is a very rare species known from only a few specimens collected along the Pacific Ocean from northwestern California to southwestern Oregon.  No additional information is presently available regarding habitat preferences of this species.

The single Oregon specimen was collected in the Coast Range in Douglas County by Ken Goeden.

This species is known from five California specimens collected near San Francisco outside the Pacific Northwest.

No information is presently available regarding larval foodplants of this species, but it probably feeds on hardwoods based on closely related species.

This species flies from mid-August to mid-September. They are presumed to be nocturnal.