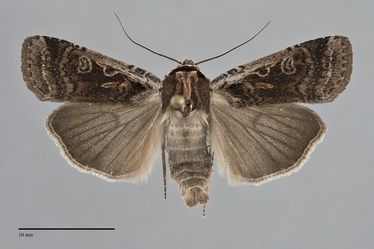 Parabagrotis formalis is a medium-sized moth (FW length 15 - 17 mm) that is highly variable in both in pattern and color. Despite the variability, it can usually be recognized by the ochre-brown to tan-brown color, elongate orbicular spot that is open toward the costa, and heavy black bar at the top of the collar. The forewing ground color ranges from gray-ochre with a light gray or orange-brown costa, gray-brown to fawn, to dark gray-brown. The forewing is often mottled, especially the distal portion, but the the portions outside of the median area are not lighter due to a gray suffusion (as in Parabagrotis exsertistigma). The costa proximal to the end of the cell and the terminal area are usually lighter than the rest of the forewing. Most specimens have a short black basal dash. The cell is of the ground color or filled with black. The transverse lines are double with lighter filling, usually slightly darker than the ground color and inconspicuous but occasionally darker and contrasting. The lines are variable at the costa, usually faint or absent but occasionally evident as darker spots. The orbicular and reniform spots are variable, usually ochre with variable filling of the ground color or light to medium gray. The orbicular spot is widely splayed toward the costa such that the limbs form an obtuse angle with each other. The reniform spot is kidney or weakly figure-eight shaped. The claviform spot is variable, usually light ochre but often absent. The hindwing is brownish gray with darker margin and very faint discal spot and veins. The head and thorax usually match the forewing ground color, occasionally warmer orange-brown. The collar is striped with a light base and thick black "Groucho Marx" mustache across the top. The male antenna is filiform.

This species is most likely to be confused with P. exsertistigma, especially darker brown colored individuals with black in the cell. Parabagrotis exsertistigma has a narrower black line across the collar than P. formalis and is much less variable, usually darker brown with faint gray suffusion outside the median area, a lighter yellow to orange costa, and black in the cell in all individuals. Its orbicular spot is narrower than that of P. formalis, forming an acute or right angle rather than an obtuse angle toward the costa. It can also be confused with Parabagrotis cupidissima, an uncommon species with a mottled tan forewing that is found west of the Cascades and in the Columbia River Gorge. This species has a smaller orbicular spot that is semicircular, not broadly splayed toward the costa, lacks the thick black collar, and has a more speckled color than P. formalis. Species with a thick black collars in other genera, like Adelphagrotis indeterminata and Adelphagrotis carissima, have round or oval orbicular spots that are not splayed open anteriorly or lack almost all forewing markings.

This species occurs in dry forests, grasslands, and steppe habitats.  In the Pacific Northwest, it is moderately common in dry grasslands, oak savanna, oak woodlands, and mixed hardwood forests at low elevations west of the Cascades.  It is rarely found in mesic environments like coastal rainforests and west-slope mixed hardwood-conifer forests, or in high-elevation spruce-fir forests.  East of the Cascades, it is common to abundant in mixed hardwood-conifer forests, dry, open ponderosa pine forests and juniper woodlands at middle elevations, and in open sagebrush steppe at lower elevations.

Parabagrotis formalis is a common moth in large parts of Oregon and Washington but is not known from interior British Columbia or further east in Idaho or Montana. In Washington it predominantly occurs east of the Cascade Range crest as far north as the Methow Valley in Okanogan County. The eastern limit of its known distribution is the Blue Mountains. Its range west of the Cascades is limited to the rain shadow of the Gulf of Georgia, including southern Vancouver Island and the adjacent Gulf and San Juan Island groups. Unlike further north, the distribution in Oregon includes the western part of the state but it is rare or absent from the Basin and Range province in the south-east.

This species also occurs throughout most of California south to the Los Angeles Basin.

No information is presently available regarding larval foodplants of this species, but it is probably a climbing cutworm that feeds on grasses and herbaceous vegetation based on related species.

Parabagrotis formalis has a long flight season with records from our region from late April to the end of September. The phenogram is bimodal suggesting two broods, but it is also possible that the adults estivate through summer and re-emerge in late summer and fall. This species is nocturnal and comes to lights.