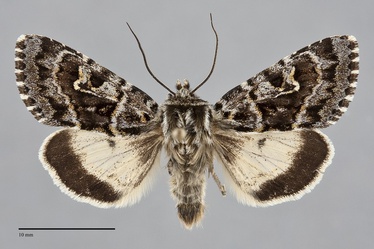 Polia richardsoni is a day-flying northern Polia species with light-colored hindwings with a black marginal band and reduced eye size, like many other diurnal arctic moths. It is our smallest Polia (FW length 13 - 18 mm). The forewing is gray-brown with extensive black and blue-gray to silvery gray mottling. In the median area gray is often present on the costal and trailing margins and in the fold distal to the claviform spot. It is also suffused over the base of the wing medial to the antemedial line and distal to the postmedial line, often completely filling the subterminal area or the terminal area or both. Ill-defined black horizontal marks are present at the wing base, in the cell and preceding the postmedilal line in the median area, and as a series of strong black wedges between veins abutting the inner subterminal line. The basal, antemedial, and postmedial lines are double with gray and thick black components, darkest abutting the median area, with pale gray filling. The former two lines are slightly irregular. The postmedial line is evenly scalloped between the veins, drawn sharply basad at the costal margin, smoothly convex around the reniform spot, and then parallel to the wing margin to meet the trailing margin at a 45 degree angle. The subterminal line is light gray, even and nearly parallel to the adjacent margin, preceded by black as described above. The terminal line is black, variable, either thin or forming a series of black triangles between veins. The fringe is checkered white to light gray and dark gray. The orbicular and reniform spots are black. The posterior spots are often joined by a light gray or white line along the cubital vein. The orbicular spot is oval filled with light gray. The reniform spot is kidney or figure-eight shaped, with an inner line of pale gray to white scales and darker central gray-brown filling. The orbicular spot is thick black, variable in size and shape from a small loop to a long hairpin. The hindwing is pale yellow with a sharply demarcated black marginal band. Gray basal suffusion and discal spots are always present, but a postmedial line on the posterior wing is sometimes absent. The hindwing fringe is white. The head and thorax are thickly scaled with hair-like scales, gray brown with lighter margins on the collar, tegulae margins, and central thorax. The male antenna is biserrate with triangular individual segments.

This species is usually easily recognized in its northern alpine habitat. Its size, gray forewing, and two-toned light and black hindwing are generally similar to Gynaephora rossii, a day-flying alpine species in the family Erebidae. The forewing patterns of these species are quite different, with well-defined lines and spots in P. richardsoni and indistinct in G. rossii. The male antennae are markedly different, widely plumose in Gynaephora and thin in P. richardsoni.

This species is an arctic-alpine species that is widely distributed on arctic tundra across northern Eurasia, Alaska, and Canada.  Southward, it is narrowly restricted to alpine tundra above timberline at the highest elevations in the Rocky Mountains.

Polia richardsoni is restricted to the mountains of northern British Columbia where it has been found as far south as Pink Mountain north of Fort St. John.

This species occurs across the Northern Hemisphere from Scandinavia to Greenland. In North America it is found across the Far North from Alaska to Greenland, usually north of the 55th parallel (McCabe 1980). Apparent relict populations are known from central Colorado and the Beartooth Plateau in northern Wyoming.

This species feeds on low arctic-alpine plants including mountain sorrel (Oxyria digyna) in the Polygonaceae, saxifrages (Saxifraga spp.) in the Saxifragaceae, and dwarf willows (Salix spp.) in the Salicaceae.

Adults are strictly diurnal and seek nectar at the flowers of moss campion (Silene acaulis) in late afternoon. They fly during the summer, usually from late June through July depending on location and the timing of snowmelt.