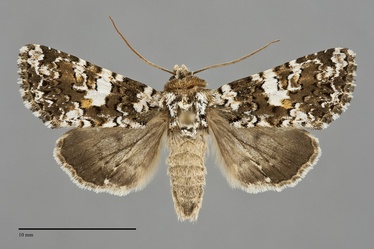 Hadena variolata is a mottled, olive-gray to olive-brown and white, medium-sized species (FW length 13 - 15 mm) that flies in forests during the late spring and summer. Its forewing has a prominent, round, white-lined, ocellate orbicular spot. The ground color is interrupted by white patches in the basal area, along the costa (including in the lines), in the central median area between the three spots, at the posterior margin between the postmedial and subterminal lines, and at the apex. These white areas are most extensive and include yellow areas in populations in the Puget Trough. The orbicular and reniform spots and lines are partially filled with white; both of these spots are dark centrally. The transverse lines are double and black. The median line is black, but only the posterior portion is evident. The subterminal line is irregular, white but incomplete, forming a weak W-mark on veins M3 and CuA1, and is preceded by a black shade that forms weak spots between the veins. The hindwing is gray, lightest at the base, with slightly darker discal spot and veins and a pale spot at the margin along vein CuA2. The head and collar are olive brown with weak pale and black banding at the base of the collar. The remainder of the thorax is a mixture of olive and white scales, palest in the central tegulae. The male antenna is bead-like. The surface of the eyes are covered with tiny hairs.

This species can be identified by its olive-gray to olive-brown color and contrasting white pattern, especially the white lining of the round orbicular spot and reniform spot. Other Hadena and Lasionycta species with similar pattern are dark gray without olive or brown color.

The North American populations of this species are geographically variable and are divided into two subspecies. The nominate subspecies which has extensive white and yellow markings on the forewing is only found in southwestern British Columbia and in the southern Puget Trough near Olympia and Tenino, Washington. The subspecies H. v. dealbata (Staudinger), which has less white markings and lacks yellow patches, is found elsewhere.

The type locality of Mamestra variolata Smith is Washington Territory, likely near Olympia, Washington based on similarity of the holotype to populations from this area.

This species is widely distributed in dry habitats in the Northern Hemisphere.  In the Pacific Northwest, it is frequent to moderately common on barren, rocky ridgetops at high elevations along the summit of the Cascades and in the Rocky Mountain region.  It is also frequent in dry, open ponderosa pine forests and juniper woodlands at middle elevations east of the Cascades.  However, it is very rare and sporadic west of the Cascades in native prairie and oak savanna at low elevations.

Hadena variolata is found in dry forests, most commonly east of the Coast Range and Cascade Mountains as far north as southern British Columbia. It has also been found in remnant prairie mosaic habitats near Victoria, British Columbia and Olympia, Washington.

This species has a Holarctic distribution. It is widely distributed in western North America. It is found from southern British Columbia and adjacent southwestern Alberta to Arizona and southern California.

This species is a foodplant specialist feeding on herbs of the pink family (Caryophyllaceae) such as Lychnis spp. and Silene spp.  Larvae tend to feed on the flowers and seedheads.

This species is single brooded. The adults fly during late spring and summer and have been collected from mid-May to mid-August in the Pacific Northwest. They are most commonly found in June and July. This species is nocturnal and comes readily to lights.