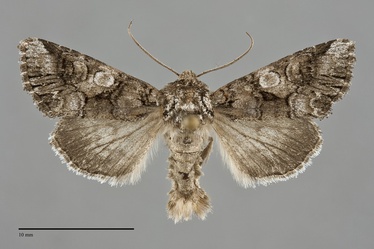 Hadena capsularis is a small to medium-sized noctuid moth (FW length 13 - 14 mm) with a complex pattern of lines and spots on a medium gray ground, including a large, pale-filled orbicular spot, a pointed claviform spot, and a series of horizontal black lines at the dentate "W" mark along the outer margin. The forewing is medium gray, lighter blue-gray between the postmedial and subterminal lines extending lateral to the terminal area at the apex of the wing and at the base in most specimens. The remainder of the terminal area is darker gray, interrupted by a jagged W-mark formed by the subterminal line. A series of thin, black chevrons medial to the subterminal line and at the margin at the W-mark form a set of thin black marks near the outer margin. The antemedial and postmedial lines are black, double, and fairly smooth in contour. The orbicular spot is very large and round to slightly oval in shape. It is filled with white to pale gray and has a slightly darker gray center. The kidney-shaped reniform spot is also black, but is much less prominent because of gray filling. The claviform extends across the median area to touch the postmedial line. The hindwing is gray with dark gray margin, discal spot, and veins and a slightly lighter gray two-toned fringe. The head and thorax are medium gray with a black transverse band across the mid collar and dark gray margins to the tegulae. The male antenna is weakly beaded, nearly filiform. The surface of the eyes are covered with fine hairs.

This species is easily confused with Hadena ectrapela, a more common and widespread species in our area. The orbicular spot of this species tends to be smaller and more obliquely-oriented than that of H. capsularis, and it has a white W-mark formed by the subterminal line in the area where H. capsularis has black lines along the outer margin.

In the Pacific Northwest, H. capsularis is rare and sporadic and has been found on open low-elevation rocky habitats and in open, dry ponderosa pine forests at middle elevations. It occurs in a variety of habitats in eastern North America.

Hadena capsularis is only known from a few locations in the Pacific Northwest. It has been found in the southern Okanagan region in British Columbia and at several locations near the border of Idaho with Washington and Oregon in the Blue and Wallowa Mountains. It might be more widespread in the Snake River Plain of southern Idaho.

This species is a foodplant specialist feeding on herbaceous plants of the pink family (Caryophyllaceae), including the genera Dianthus and Silene.  Larvae tend to feed on the flowers and seedheads.

Adults are single-brooded and fly in spring and early summer in our region. All of our Pacific Northwest records are from May and June. This species is nocturnal and comes to lights.