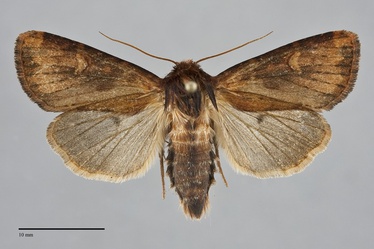 Resapamea enargia is an enigmatic taxon that might be a synonym of Resapamea innota. This is a moderately large, tan to orange-brown moth (FW length 15–19 mm) that flies in southern Oregon in our area. It has dark gray-brown shading on the anterior wing and in the terminal area. and ochre-filled reniform spot. The forewing is relatively broad and rounded. The ground color is even orange-brown to tan. All specimens have dark gray-brown or brown with indistinct margins on the anterior and mid-median area, on the costa from the base to the subterminal area, and in the terminal area. The veins are often dark, usually at the tips of the teeth of the antemedial and postmedial lines but sometimes across the entire distal wing. The basal, antemedial, and postmedial lines are gray, single, well-defined when evident. The basal line is absent or evident on the costa. The antemedial line is present in about half of the specimens, moderately angled toward the outer margin and zigzagged on the posterior wing. The median line is usually absent, sometimes faintly visible on the costa and posterior to the median shade. The postmedial line is toothed, smoothly arched around the end of the cell and angled toward the base below the reniform spot. The subterminal line is pale but barely evident, preceded by a thin diffuse shade in some specimens. The terminal line is thin and dark. The fringe is red-brown with a dark edge. The orbicular and reniform spots are outlined in gray-brown. The orbicular spot is small and round, filled with the ground color or slightly lighter shade and sometimes with slightly darker centrally. The renform spot is moderately large, kidney-shaped, filled with slightly lighter orange-brown, sometimes with a dark central lunule or dark brown spot and the lower end. The claviform spot is usually absent, small and dark gray when present. The hindwing is even dark gray with slightly darker veins, discal spot, and terminal line. The hindwing fringe is light ochre to orange. The head and thorax are dark orange-brown. The male antenna is beaded.

This species can be recognized by its dark orange-brown color, dark brown shading in the anterior median area, and large pale-filled reniform spot. It is similar to Resapamea innota but slightly larger, more orange-brown rather than red-brown, and has better-defined forewing lines. The relationship of these taxa is discussed further in the next paragraph. Resapemea passer, a widespread and variable species, has forms which resemble R. enargia. It is usually duller grayish brown or tan and usually has some elements of the spots defined by thick black lines, unlike R. enargia.

Luperina enargia (Barnes and Benjamin) was described from Monachee Meadows, Tulare County, California and Luperina innota (Smith) was described from Yellowstone Park, Wyoming. Photographs of the type specimens made available by Don Lafontaine suggests that these taxa are the same species. Luperina enargia is the younger name and is therefore a junior synonym of Luperina innota.  We use the name enargia as a place-holder while the true identity of the mottled populations described above is elucidated. Possibilities include that these are a distinctive population of R. innota or an undescribed species.

The large, mottled form of this species is usually very rare and sporadic, but is widely distributed in western North America in a wide variety of habitats.  It is most common in high elevation subalpine meadows in the Rocky Mountains of Colorado, but has also been found in low elevation riparian habitats along the Snake River in eastern Oregon, and in wetland or riparian habitats at middle elevations in the Siskiyou Mountains of southwestern Oregon.

The range of this taxon is poorly understood. Specimens referable to this taxon have been examined from central Utah, and are particularly common in the Rocky Mountains of Colorado at high elevations.

No information is presently available regarding the larval biology of this species, but it probably bores into stems and roots of herbaceous vegetation based upon closely related species.

This species flies during the summer and has been collected during July. It is nocturnal and comes to lights.