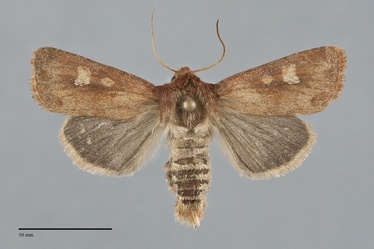 Resapamea innota is a medium-sized moth (FW length 14–17 mm) with two forms, one with red-brown forewings with pale reniform spot and the other with gray and light tan forewings with lighter spots and a more complex pattern. They fly together in wet meadows at low or middle elevations during the summer. The forewing has a relatively short wing. The more common red-brown forewing is usually nearly uniform red-brown with a slightly darker median area, sometimes with more contrasting dark red-brown in the anterior and mid-median area, terminal area, and veins. The tan form has a darker gray-brown median area and diffuse stripes in the terminal area with lighter gray veins. Other color forms exist but are less common, including uniform entirely dull gray or tan specimens. The basal and antemedial lines are usually absent; the antemedial line is sometimes evident as spots on the veins or as a diffuse gray line, slightly angled toward the outer margin and drawn inward on the veins. The median line is absent or faint, angled at the reniform spot. The postmedial line is toothed, often with dark lines at the tips of the teeth, smoothly curved around the end of the cell and nearly straight below the cell at an steep angle toward the base. The subterminal line is pale, faint, sinuous, sometimes preceded by a dark shade of the ground color. The orbicular and reniform spots are outlined in faint gray and filled with light ochre. The orbicular spot is a small circle. The reniform is kidney-shaped, sometimes with a dark central crescent of the ground color or a gray spot in the lower end. The claviform spot is usually absent, small and black or gray when present. The hindwing is even medium-dark gray with a variable absent to darker gray discal spot and light ochre to slightly orange fringe. The head and thorax match the forewing color, usually red-brown or gray-brown. The male antenna is beaded to weakly biserrate.

The red form of this moth is fairly easily identified due to the relatively unmarked pattern with light reniform spot and gray hindwings with a light fringe. Red-brown specimens of Resapamea passer usually have some black markings, usually with a thick anterior outline to the claviform spot. The tan and gray form of R. innota is easily confused with some forms of Resapamea passer, but as with the red forms this species usually has black markings on the forewing. Apamea niveivenosa obscuroides is an ochre to orange-ochre moth that flies with R. innota at some locations. It is similar to the tan and gray forms of it but can usually be differentiated from it by more distinct markings on the distal wing and absence of filling of the reniform spot that is lighter than the color of the rest of the wing.

The relationship of R. innota to large mottled specimens from southern Oregon and the Great Basin is uncertain. We have called these populations Resapamea enargia on this website (2012), recognizing that this name is likely to be a synonym of innota based on examination of the types in photographs. This is discussed further under R. enargia.

The small dark form of this species is found in wet meadows at middle to high elevations in the mountains east of the Cascades, and is particularly common in the Steens Mountains and Warner Mountains of southeastern Oregon. It has been collected at lower elevations but does not appear to be as common there as at high elevations.

Resapamea innota is found in eastern Washington and Oregon, and across central and southern Idaho.

This species occurs in the American west. It has been taken in the Rocky Mountains, the Basin and Range province, and northern and eastern California outside of the Northwest.

No information is presently available regarding the larval biology of this species, but it probably bores into the stems and roots of herbaceous vegetation based upon closely related species.

The flight season of R. innota is the summer from mid-June through July. It is nocturnal and comes to lights.