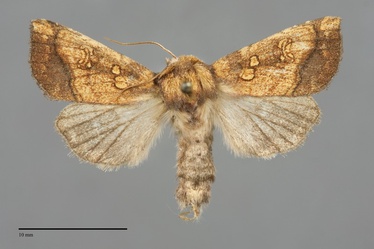 Papaipema harrisii, the Cow Parsnip Borer Moth, is a small to medium-sized noctuid moth (FW length 13–16 mm) that flies in the Peace River region of British Columbia during the fall. It has powdery ochre-yellow to orange-yellow forewings marked with irregular yellow spots. The ground color is powdery ochre yellow, often with an orange cast. Purplish gray is present in the antemedial and subterminal areas. The antemedial and terminal areas are slightly darker and browner than the mid-forewing; the terminal area is often brown or orange brown except near the apex. The basal, antemedial, and postmedial lines are double and darker red-brown. The antemedial line is sinuous. The postmedial line is the darkest line, especially the dark gray outer component. Its anterior portion is parallel to the costa, then turns sharply to extend as a straight line diagonally across the wing to the trailing margin. The subterminal line is scalloped deeply, evident as the transition between purple-gray subterminal and yellow terminal areas. The terminal line is red-brown, interrupted at the veins. The fringe is purplish gray. The orbicular and suborbicular spots are similar and are the most prominent light forewing markings. Both spots are outlined with gray or dark brown and are filled with light yellow, occasionally white; darker scales often fill the central orbicular spot and bisect the suborbicular spot. The reniform spot is lobulated kidney or figure-eight shaped with a complex pattern of orange and yellow filling and dark lines. The hindwing is dirty pale brown, slightly darker on the outer half with a few ill-defined pale patches near the outer margin, with dark veins, dark terminal line, and faintly fiscal spot and medial line. The thorax and a dorsal tuft on the anterior abdomen are concolorous with the forewing. The abdomen is similar in color to the hindwing.

This moth occurs in parklands and open forests. Its habitat in adjacent Alberta is mesic areas in parkland (Gary Anweiler pers. comm. 2016)

Papaipema harrisi has a limited distribution in the Pacific Northwest. It has only been found near the Peace River in northeastern British Columbia. It might be more widely distributed in British Columbia east of the Continental Divide.

The global range of this species extends across the Canadian Prairie Provinces to the Midwest and East Coast. Its range along the Atlantic Seaboard extends from Newfoundland to New York.

The larva of this moth is a borer in large umbels (Apiaceae), particularly cow parsnip (Heracleum sp.) and Angelica sp.

Adults of P. harrisii fly during the fall. The only record from British Columbia is from early September.