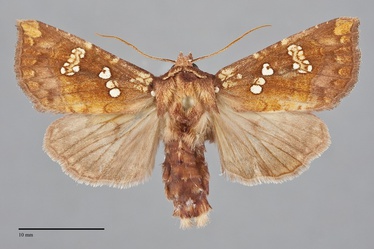 Papaipema insulidens is a medium-sized, burnt orange moth (FW length 16–20 mm) that flies in forests west of the Cascade Mountains and in steppe wetlands during the fall. It has variable amounts of gray shading, a pattern of net-like white forewing spots, and patchy yellow and purplish markings. The forewing is broadly triangular with a pointed and slightly hooked apex. The ground color various geographically, powdery burnt orange suffused with yellow posteriorly and along the costa, darker brown west of the Cascades and reddish orange east of the mountains. The basal area and apex are yellow and the subterminal area is purplish gray, also darkest in the western populations. The transverse lines are slightly darker than the ground, double filled with a slightly lighter yellow. The antemedial line is indistinct, evident on the anterior half of the wing against the yellow basal area which also fills the anterior half of the line. The medial line is red-brown to dark brown, diffuse and slightly undulating posterior to the reniform spot. The postmedial line is smooth, often with a purplish outer component, smoothly and widely curved around the reniform spot to between CuA1 and CuA2, then slightly angled toward the base and incurved at the posterior margin. The subterminal line is yellow, faint, most evident as a light transition between the purple subterminal area and yellow and red-brown terminal area, offset below the apex and strongly scalloped. The terminal line is thin, dark red-brown. The fringe is purple-gray with a burnt orange base. The spots are outlined in dark red-brown and are usually filled with white; some western specimens have spots filled with yellow or a mixture of dark brown and yellow. The round orbicular spot contains a dark central dot and is partially fused to a figure-eight-shaped subreniform spot that is bisected by a thin red-brown line. The reniform spot is ovoid, slightly tilted and weakly hourglass-shaped, with a net-like pattern formed by a central yellow and red-brown crescent and red-brown veins. The hindwing is geographically variable, darker and grayer in western populations and light yellow-gray with slight reddish and gray suffusion that spares the marginal area in eastern ones. The veins, discal spot, and terminal line are darker gray. The hindwing fringe is also variable, gray to pale yellow with or without a pink tint. The head and thorax are orange brown, lightest yellow on the top of the head and edge of the collar. A strong median tuft is present on the anterior thorax. The base of the antenna (scape) is pure white. The male antenna is bead-like.

Papaipema insulidens (Bird), originally described in the genus Hydroecia, is described from Vancouver Island. Its synonym Papaipema pertincta (Dyar) has a type locality of Forest Grove, Oregon. These names were both given species status until they were placed in synonymy by Lafontaine & Schmidt (2015).

This species flies with two other similar Papaipema species, Papaipema sauzalitae west of the Cascades and Papaipema limata east of the mountains. Papaipema insulidens can be distinguished from P. sauzalitae by its less conspicuous and more evenly excurved postmedial line, straighter and darker in P. sauzalitae after a sharp bend near the costa. Also, the hindwing of western P. insulidens specimens is usually mostly gray without much of a pattern; that of P. sauzalitae is lighter with a net-like pattern of dark veins and transverse lines. Papaipema limata differs from eastern specimens of P. insulidens in being lighter yellow, in having a white-filled orbicular spot lacking a dark central dot, and in having a smoother subterminal line. Hydroeciodes serrata is a Papaipema-like member of the tribe Eriopygini that flies in the Wasatch Mountains of southeastern Idaho in our region. It is remarkably similar to P. insulidens in color and pattern, but differs structurally in having small hairs on the surface of the eyes that are visible under magnification. Males are easily distinguished from those of P. pertincta by the wide bipectinate antennae. It flies in forests whereas P. insulidens occurs in low-elevation wetlands.

This species occurs in a variety of low to middle elevation habitats west of the Cascades, including forests and natural and disturbed open areas. It prefers wetlands and riparian habitats along creeks and rivers in steppe regions.

This species is a borer in the stems of its hostplants. It has been found in various umbels (Apiaceae), lilies, and composites such as tansy ragwort (Senecio jacobaeae) in the Northwest. This moth is locally common in some parts of western Oregon in association with this invasive plant. Crumb (1956) also lists lupine (Lupinus polyphyllus) and cow parsnip (Heracleum lanatum) as food plants.

The flight period of P. insulidens is late summer and fall, usually from mid-August through November in our region. The flight period is later in the western part of its range, often occurring after most other moths have stopped flying for the year. It is nocturnal and comes to lights, but is not highly vagile. It does not wander far from wetlands in dry regions.

This species might have some beneficial value as a biological control agent against tansy ragwort.