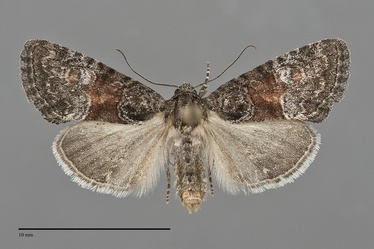 Neoligia lillooet is a rarely collected, small moth (FW length 10–11 mm) that is restricted to southern British Columbia. It has a mottled gray forewing with a dark gray to wine red median area, a dark gray terminal area, and a whitish reniform spot. The basal and median portions of the forewing are darker than the distal wing. The proximal subterminal area and the median area distal to the reniform spot is mottled medium-dark gray with dark veins. The distal subterminal area and terminal area are dark gray, interrupted by the patchy irregular gray subterminal line. The median area except lateral to the reniform spot is bright wine red, blackish gray, or a mixture of the two with the red showing weakly against the dark gray. The base proximal to the antemedial line is dark gray, similar to the terminal area or the median area, with a diffuse blackish patch near the trailing margin that is visible in lighter-colored specimens. The basal and antemedial lines are gray, double, only clearly seen in specimens with lighter adjacent color, finely undulating and arched toward the lateral margin. The median line is gray, evident on the costa only in lighter specimens. The postmedial line is gray, double and filled with gray, light gray near the posterior margin. It is sharply drawn toward the base on the costa, forms a tight loop around the end of the reniform spot and touching the upper and lower spot, then slightly concave toward the base below the spot. The subterminal line is described above. The fringe is checkered medium and dark gray. The orbicular spot is round, usually completely obscured by the adjacent dark gray but filled with light gray in a few specimens. The reniform spot is large, outlined by a double gray line and filled with whitish gray. The claviform spot is absent. The hindwing is light gray with darker gray toward the margin and a dark thin terminal line. The hindwing fringe is two-toned gray. The head and thorax are dark gray. The male antenna is filiform.

Males of Neoligia have a spine that extends ventrad from the proximal ventral cucullus which can be examined under magnification after removing the scales from the tip of the abdomen with a fine brush. That of N. lillooet is very small and barely perceptible, much smaller than that of all other Pacific Northwest species. The distal cucullus of N. lillooet is rounded.

The larva of N. lillooet is unknown.

This moth flies in mixed forests of Douglas fir and pine at middle elevations in south-central British Columbia. It is a rarely collected moth.

This species has been collected in extreme southwestern Alberta outside of the Northwest.

The flight season of N. lillooet is summer. It has been collected during July and August.