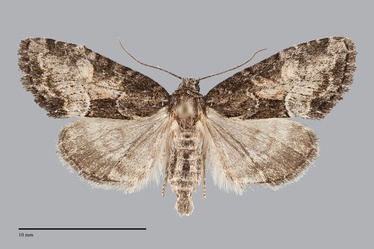 Neoligia subjuncta is a small moth (FW length 11–13 mm) that flies in boreal forests during the summer. It has a light olive-tan forewing that sometimes is red-brown in the mid-median area and is marked with variable, dark markings that includes a long strong black median dash. The forewing is slightly pointed and the outer margin is smoothly convex without a notch or scalloping above the anal angle. Dark gray markings are variable, most consistent along the costa to the postmedial line, on the base to the antemedial line, posterior to the median dash, and in the terminal area. The mid-median area often has a slight wine-red flush, strong in some coastal specimens. The transverse lines are gray and double, filled with gray on the costa, the light olive ground color across most of the wing, and whitish from the fold to the posterior margin. The antemedial line is indistinct on the anterior wing in most specimens, bulging laterally in the fold with the apex at the median dash. The postmedial line is lightly scalloped on the segment around the cell and smoothly concave toward the base on the posterior wing with apex of the curve at the median line. The median line is gray, evident on the costa. The subterminal line is pale olive, diffuse, sinuous, and usually complete. It is preceded by a gray shade on the mid-wing. The terminal line is black, thin. The fringe is dark gray. The orbicular spot is round, evident as the light olive ground color filling and a pale gray central ocellus. The reniform spot is moderately large and kidney-shaped, evident as the pale olive ground filling. A claviform spot is not visible separate from the median dash. The hindwing is pale gray with darker gray veins, discal spot, thin postmedial line, ill-defined marginal band, and two-tone fringe. The head and thorax are gray. The male antenna is filiform.

This species can be identified by its small size, extensive pale olive-tan color on the distal and mid-wing and in the reniform spot, and the black median dash attached at each end by smoothly curved black and white segments of the adjoining antemedial and postmedial lines. It is similar to other species of Neoligia but is probably the easiest species in the genus to recognize without examination of the genitalia structure. The other species are more gray, with or without bright red-brown color, and more mottled. The filling of their reniform spot is not uniformly pale. They have black median dashes, but this mark is not as prominent as in N. subjuncta.

Males of Neoligia have a ventrally directed spine arising from the proximal ventral cucullus that can be observed by brushing the scales from the tip of the abdomen with a small brush. That of N. subjuncta is short and blunt.

This species flies in forests and meadow habitats from low elevations to high elevations near treeline in the Rocky Mountain region of the Northwest where it is uncommon. It is common in open prairie habitats on the northern Great Plains.

Neoligia subjuncta is found throughout British Columbia, including on Vancouver Island, as far north as the Peace River region. South of Canada it occurs in northeastern Washington, northern and southeastern Idaho, and in the Blue Mountains of eastern Oregon.

The range of N. subjuncta extends across northern North America from Alaska to Nova Scotia and Maine. Its range extends south to Colorado and northern Arizona in the Rocky Mountains.

No information is presently available regarding the larval biology of this species.

The flight period of this N. subjuncta is summer, with most records from July in our region. It is nocturnal and comes to lights.