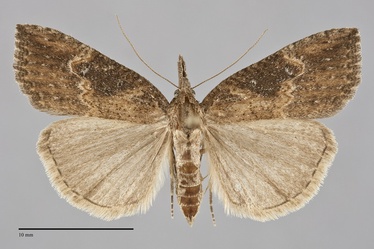 Hypena humuli is a small to medium-sized moth (FW length 13–16 mm) with long palpi and a drab brown triangular forewing wing variable pattern of dark, including patches of raised scales, that flies throughout the Northwest during most of the year. The apical forewing is shaped like a right triangle with a weakly falcate apex. The most common form is uniform finely mottled medium-dark dull brown. Another frequent form is dull ochre-tan with extensive patches of dark blackish brown on the anterior half of the wing proximal to the postmedial line, variably on the posterior half of the median area, from the end of the cell to the outer margin, and in the terminal area. A third form is entirely dark blackish brown. All forms have small patches of raised black scales at the orbicular and reniform spots, at the anterior and posterior ends of the reniform spot, and less prominently at the wing base. The postmedial line is strongly zigzagged across the wing, strongly angled apex lateral at the end of the cell. The subterminal line is a series of short longitudinal pale lines, which have a greenish hue. The terminal line is dark, accentuating the scalloped contour at the base of the fringe. The fringe is uniform or weakly checkered. The spots are reduced to the raised patches described above and a few pale gray scales. The hindwing is broad, uniform brown-gray with a very faint discal spot and dark terminal line. The hindwing fringe is slightly lighter brown-gray. The head and thorax are gray-brown or ochre, matching the forewing color. The palpi are very long and laterally flattened, upturned at the tip. The male antenna is filiform.

This species can be identified by its triangular wing shape, long palpi, dull gray-brown or mottled ochre and gray-brown color, and the small spots of raised scales. It is most likely to be confused with other species of Hypena, particularly Hypena californica and Hypena modestoides which fly west of the Cascades, and Hypena decorata which occurs on both sides of the mountains. Hypena humuli has a broader wing than these species, evident on the plates on this site, has a less hooked forewing apex, and is duller without any hint of a sheen on the forewing.

This species is widely distributed in a variety of habitats throughout much of North America. It is common in moist forests, riparian zones, and in disturbed agricultural and urban areas.  It occupies a wide range of elevations from lowlands to high mountain meadows.

Hypena humuli is found in most of our region as far north as south-central British Columbia. It occurs on both sides of the Cascade Range and is found in forested and around the periphery of the interior steppe regions.

This moth is widespread in North America, occurring from coast to coast across southern Canada and most of the Continental United States. It is only absent from the most southern reaches of Florida and Texas and the most arid deserts.

The flight season of H. humuli is very long, lasting nearly the entire year. The phenogram demonstrates a peak flight in the spring, and one or two less distinct peaks during summer and fall. Grasswitz (2008) indicates that there are up to three generations in Washington, with overlap between the stages of each generation.

This species is a pest of commercial hops, including in the Northwest (Grasswitz 2008).