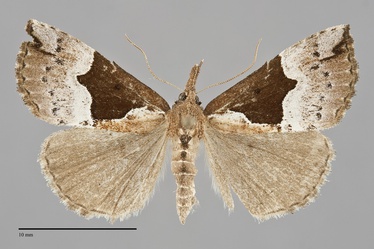 Hypena bijugalis is strongly sexually dimorphic with very different-appearing males and females. It is a small moth (FW length 13 - 15 mm) with triangular forewings in both sexes, with males slightly larger than females. The males have dull, dark brown forewings marked with pale fragments of the transverse lines, spots at the base of the fringe, and a pale patch at the posterior margin lateral to the postmedial line. Those of females have smooth dark brown medial to the postmedial line and pale gray lateral to this line. The latter area is nearly white near the postmedial line, darkest at the margin, and blue-gray at the apex. The margin posterior to the brown is golden brown, bounded by a segment of the antemedial line. The unusually-shaped pale antemedial line runs parallel to the posterior margin and fused to the postmedial line near the edge of the wing. The postmedial line is very smooth, drawn laterally to a tooth-like projection at the lower edge of the cell. The subterminal line is pale with a series of gray to black spots proximal to it. A jagged black mark borders the blue-gray patch at the apex. The hindwing is dark gray-brown in the male and slightly lighter in the female. The palpi are very long. The male antenna is ciliate and that of the female is simple.

This species is common and widely distributed in moist forest habitats throughout North America.  It is particularly common in mixed hardwood-conifer forests at low elevations west of the Cascades.

This species is widely distributed in forests in our region.

This species has a broad distribution in North America. In the East it occurs from southern Canada to Alabama and Texas. The western distribution is less well known.

This species feeds on hardwoods such as dogwoods (Cornus spp.) in the Cornaceae.

Adults fly during the summer months. Pacific Northwest records are from June, July, and August. It is nocturnal and comes to lights.