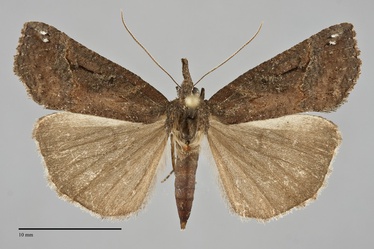 Hypena decorata is a medium-sized Hypena (FW length 15–18 mm) with long slightly hook-tipped forewings. It is sexually dimorphic. The males are slightly larger than the females and have dark brown forewings marked with two white spots near the apex. The orbicular and reniform spots are comprised of raised scales of varying colors but appear black to the naked eye. The reniform spot is joined to a thin, black bar in the outer part of the cell. A similar third black spot is present in the median area below the cell. The females are mottled brown and slightly purplish gray, darkest in the median area and near the outer margin below the apex. The lines are more prominent in the females because of the paler background. The antemedial line has two sharply pointed lateral projections, like a sideways letter "M." The postmedial line is nearly perpendicular to the wing axis, undulating in shape toward the posterior margin and weakly laterally convex near the reniform spot. The broad hindwing is gray with a slight yellow tint, with faintly darker discal spot and veins. The palpi are very long, and the antennae are simple in both sexes.

A rare form of this species (not illustrated) has much of the forewing covered with white translucent scales. This contrasts with dark on the distal forewing and near the reniform spot.

The males are unmistakable because of their long dark brown forewings with two white dots near the apex. Females can be distinguished from other long-winged Hypena species by the small patch of raised dark scales in the median area, and by the transverse course of the postmedial line across the wing and its straight shape near the reniform spot. Other Hypena species lack the patch of raised scales in the median area. Their postmedial lines have an oblique orientation or an irregular course near the reniform spot.

This species is relatively uncommon to rare in moist hardwood forests or riparian zones west of the Cascades at low elevations, but extending to lower elevations in the Rocky Mountain region. It also occurs in riparian areas at the edges of the Columbia Basin.

Hypena decorata is found in southwestern British Columbia and western Oregon and Washington. It has also been found at several locations around the Columbia Basin in Washington.

This species is a foodplant specialist feeding on nettles (Urtica spp.) in the Urticaceae.

The adult flight season is bimodal suggesting the presence of spring and summer broods. The former peaks in April and the latter in August. This species is nocturnal and comes to light and sugar bait.