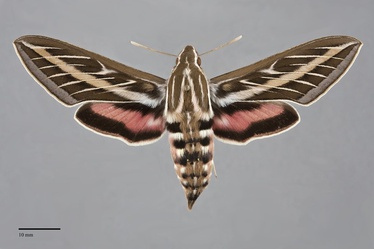 Hyles lineata is a common sphinx moth that is often observed hovering while feeding at flowers in the evening.  It is a large to very large (FW length 29–40 mm) and flies throughout the Pacific Northwest during most of the year. Its forewings have a diagonal yellow stripe and white veins, and its hindwing is pink and black. The forewings are long and narrow with a smooth, weakly convex outer margin.  They are dark olive-brown with a silver-gray terminal area, an ochre line extending diagonally from the posterior wing base to the apex, and prominent, creamy white veins and discal spots.  The hindwing is striped deep pink and black.  The head and thorax are similar in color to the forewing ground color, longitudinally streaked with white on the head and tegulae.  The abdomen is brown dorsally and pink laterally with a series of black and white stripes dorsolaterally. The antenna is club-like.

This familiar species can be identified by its large size, white veins on the brown and yellow forewing, and the pink and black hindwing.  It is most similar to Hyles gallii, which has a similar color pattern. but lacks white marks on the thorax and forewing.

The larva is polymorphic black, yellow, or green with yellow lateral and subdorsal lines and a caudal horn.  It is illustrated by Powell & Opler (2009).

This species is common throughout the Pacific Northwest at all elevations in all types of habitat including urban areas, low elevation grasslands west of the Cascades, high mountain meadows, and desert rangelands east of the Cascades.

This species is found everywhere in the Pacific Northwest as far north as southern British Columbia.  Scattered records from further north include Haida Gwaii and in the Peace River region of British Columbia, but does not appear to be a regular resident in much of the rest of the province.

Hyles lineata is found everywhere in the continental United States except northern Maine. Its range extends from southern Canada to the Mexico border elsewhere. It is often abundant in the desert Southwest.

This species is a foodplant specialist feeding on a wide variety of Onagraceae.  It particularly favors fireweed (Epilobium spp.) and evening primroses (Oenothera spp.) in the Pacific Northwest.

Adults are predominantly nocturnal, but also fly during the evening.  The are avid feeders at flowers, especially those with long corollas, and are familiar to many as "hummingbird moths."  This species has a long flight season with records from late spring until late fall.

The larvae may sometimes damage ornamental members of the evening primrose family in urban flower gardens.