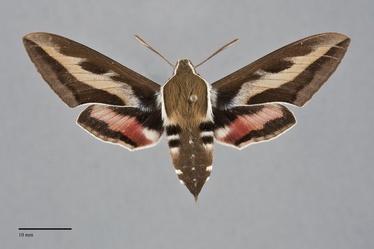 Hyles gallii is a large to very large moth (FW length 26–32 mm) that flies in forests during late spring and summer. It has a yellow stripe on the forewing and dark pink hindwing, both surrounded by dark gray. The forewing is typical for the family, long with a convex distal costal margin, slightly concave distal posterior margin, and a smooth outer margin. The ground color of both fore- and hindwings are dark olive-brown to blackish gray. The forewing costa and terminal area are slightly lighter and browner than the central dark areas. A light ochre stripe extends from the trailing margin near the base to the apex. The veins are inconspicuous, dark on the yellow and slightly lighter near the apex, but not white. The hindwing is small and ovoid, with an oblique deep rose pink stripe, parallel to the yellow on the forewing in spread specimens. The hindwing fringe is lighter gray with a pink tint. The head and thorax are olive-brown, lighter than the dark areas on the forewing, with white the sides of the head that continues posteriorly on the lateral tegulae. The antenna is club-like.

Hyles gallii is readily identified by its large size, yellow stripes on the forewings, and pink stripes on the hindwings.  It is similar to Hyles lineata, a very widespread and familiar moth in our area, but lacks the prominent white lines on the veins of the forewing of that species.  Hyles gallii is less common, has a more boreal distribution than H. lineata, and is not found in steppe habitats.  Hyles gallii is most similar to the Eurasian species Hyles euphorbiae, an introduced species that is mostly found to the east of our region.  H. euphorbiae has a lighter greenish tan rather than dark olive-brown forewing ground color, and the pale oblique band is less well defined toward the anterior than in H. gallii, extending to the costal margin.

The larva is polymorphic black, brown, or green with orange lateral spots and a caudal horn.  It is illustrated by Powell and Opler (2009).

This species is usually uncommon in northern forest or mountain regions of the Cascades and Rocky Mountains.  It is found in conifer forests and open meadow habitats.  It often become more common in the years following a forest fire.  This species is considered to be management-sensitive, and benefits from thinning and burning that maintain disturbed openings and meadows in the forest.

Hyles gallii is found in forests throughout most of the Pacific Northwest, from the latitude of Yellowstone National Park north to Yukon Territory.  It is most common in mountains and boreal regions, although its range stretches to the coast near Puget Sound in Washington.  Hyles gallii has been collected most frequently in northern Washington and adjacent British Columbia.

This species is widely distributed in boreal and subarctic North America from the North Slope of Alaska to northern Quebec and Labrador.  Its range extends south to the northern Continental United States and further south in the Rocky Mountains to northern Colorado.

This species is a foodplant specialist feeding on fireweed (Epilobium spp.) in the Onagraceae.

Adults have been collected from mid-May through August but are most common in June and July.  They are nocturnal and come to light.