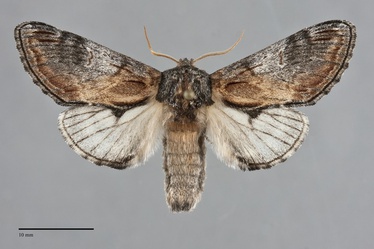 Notodonta pacifica is an attractive warm brown and gray prominent moth with pale hindwings.  It is large (21–24 mm.) with elongate apically rounded forewings bearing a black flange at the inner third of the posterior margin.  The ground color is ochre and red brown along the posterior and most of the terminal wing.  The remainder is hoary gray, lightest in the median area.  The irregular antemedial line and scalloped postmedial line are slightly darker gray, while the postmedial line is pale preceded by a red-brown shade.  The reniform spot is a transverse dark gray or red-brown line surrounded by paler scales.  The basal area bears a thin red brown or black dash—some specimens have a similar dash in the base of the cell—and a dark brown to black line at the posterior margin near the flange.  Two dark gray or red-brown horizontal dashes are present between veins at the apex.  The hindwing is white, variably suffused with gray (darkest in females) with dark gray discal spot, veins, and anal angle. The thorax is dark gray with a tan central area.  The male antenna is bipectinate.

This species can be distinguished from other Pacific Northwest moths by the combination of gray and red-brown forewing with light gray anterior median area, red-brown shade near the outer margin, and flange on the posterior margin of the forewing.  It is closely similar to Notodonta manitou, an eastern species that occurs only in northeastern British Columbia in our area.  These species are best separated by locality.

This species is usually rare and sporadic, and is restricted to mixed hardwood-conifer forests or riparian areas along creeks at lower elevations both west and east of the Cascades.

This species has a fairly broad distribution in the Pacific Northwest, but most records are from open forests and riparian areas at the edge of the Columbia Basin.  The range extends north to southern British Columbia, reaching the northern Okanagan region.  Isolated records from west of the Cascades are from the northeastern Olympic Peninsula in Washington and the northern Willamette Valley in Oregon.

This species is confined to the American West.  The range extends to the northern half of California and Nevada to the south of the Northwest region.

No specific foodplant records are available, but it may be a specialist on aspens (Populus spp.) in the Salicaceae based upon the foodplants of closely related species of Notodonta.

Notodonta pacifica appears to be single-brooded.  Adults have been found from early May to August, with most records prior to mid-July. They are nocturnal and come to light.