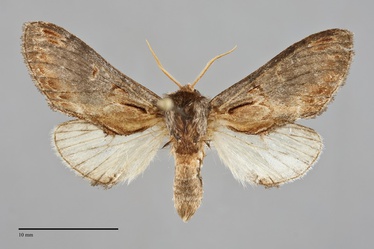 Notodonta manitou is a predominantly eastern North American moth that barely enters northeastern British Columbia. It is a medium-sized to large moth (17–20 mm) with a gray and orange-brown forewing that has a flange along the posterior margin.  It resembles closely Notodonta pacifica in color and pattern.  In general, the forewing of N. manitou is smoother gray with less whitish gray in the anterior median area, the brown areas on the forewing are warmer colored with more orange, and the hindwing veins are lighter gray.

This species and N. pacifica are best separated by locality.  Notodonta manitou occurs only in northeastern British Columbia while N. pacifica flies from southern British Columbia to California. N. manitou was recently recognized as being distinct from N. scitipennis, an eastern North American species that does not occur in our region. The specimen depicted on this site is of N. scitipennis.

The larva is smooth, brown with white stripe along the side, and has prominent fin-like thoracic humps and a caudal hump. It is depicted by Miller et al. (2018).

This species is found in eastern hardwood forests and riparian habitats east of the Rocky Mountains.  It occurs in boreal forest in the Peace River region of northeastern British Columbia.

Notodonta manitou has been found in the Peace River District in northeastern British Columbia.

This species is found in southern Canada and the northern United States from eastern British Columbia and central Alberta to the Atlantic Coast.  It occurs in the Rocky Mountains south to northern Colorado and extends east to the Maritime Provinces. Its range extends south in the eastern United States into northern Minnesota and Wisconsin and Maine.

This species appears to be a foodplant specialist on members of the Salicaceae and it may be a specialist on quaking aspen (Populus tremuloides).

This species is found in summer, from June to August in the East.  British Columbia specimens were collected from late May to mid-July, while those in Alberta have been found during June and July.