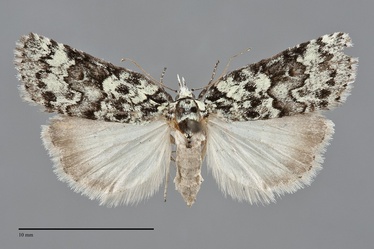 Nycteola columbiana is a small gray or shiny greenish moth (FW length 12–13 mm) with a rectangular forewing shape and variable pattern of dark spots and sinuous transverse lines. The base of forewing is broad due to expansion of the proximal costa which gives the wing a rectangular shape that is typical of the genus. The ground color is variable, pale greenish-white or medium-dark gray color with a slight sheen. The median area—especially the anterior portion—and the apex are darker gray. The antemedial area is strongly mottled with powdery black in some specimens. The basal, antemedial, and postmedial lines are dark gray to black, double with filling of the ground color. The basal line is strongly slanted from the costa toward the outer margin. The antemedial line is prominent with a darker gray to black lateral component, sinuous with convex outward segments in the cell and at the posterior margin, slightly slanted from the costa toward the outer margin. The median line is absent. The postmedial line is slightly weaker than the antemedial line, irregular, oriented nearly perpendicular to the wing and drawn toward the base on the costa and as a rectangular "dentil" in the fold. The subterminal line is pale, diffuse, preceded by prominent gray to black spots that are often fused into a jagged shade or checkerboard. The terminal line is dark gray, broken by the veins. The fringe is gray. The orbicular spot is absent or a faint gray spot. The discal spot is a small dark gray or triangle surrounded by a thin halo of the ground color. The claviform spot is absent in the small series examined. The hindwing is light whitish to tan-gray, darker gray toward the margin, lacking darker marks. The head and thorax are speckled light green and black or dark gray. The palpi are long with medio-laterally flattened anteriorly directed distal segments. The male antenna is filiform.

This species can be identified as a Nycteola by the small size, rectangular forewing shape, and pattern of mottled light gray and blackish markings. It is difficult to tell from our other two members of the genus. It can be told from Nycteola cinereana by the lack of a dark mark on the trailing margin at the base of the forewing. It resembles closely Nycteola frigidana but is usually more mottled, especially on the distal wing and in the antemedial area in some specimens. Strongly greenish specimens of N. columbiana are most easily disinguished from N. frigidana which tends to be gray in the Northwest. The lateral bulges of the antemedial line in the cell and at the posterior margin are more pronounced in N. columbiana. These species are best distinguished by dissection with differences in the male and female genitalia described below.

The male genitalia of the three Nycteola species differ in the shape of the distal aedeagus. That of N. columbiana has a large scythe-like sclerotized process. This is a small hook in N. cinereana and lacks a curved process in N. frigidana.

This species is common but narrowly restricted to coastal rainforests in both the Coast Range and along the west slope of the Cascades. It is rare and sporadic in the Rocky Mountain region. The habitat in this portion of its range is unknown to us, but riparian forest is considered most likely.

Nycteola columbiana is found predominantly west of the Cascades as far north as Vancouver Island. The range extends east through Washington to northern Idaho, with isolated records from the east slope of the Cascades, the Blue Mountains, and the Panhandle of Idaho.

This species is restricted to the West Coast of North America from southwestern British Columbia to California.

No specific information is presently available regarding larval foodplants for this species, but it is probably a foodplant specialist feeding on willows (Salix spp.) in the Salicaceae like other members of this genus.

Nycteola columbiana appears to be double-brooded in the Northwest with spring and late summer flights. It is nocturnal and comes to lights.