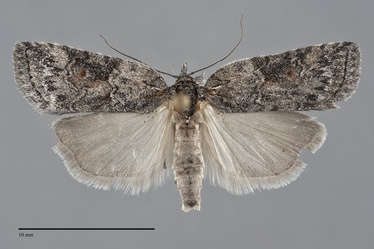 Nycteola frigidana is a small gray moth (FW length 11–13 mm) with a rectangular forewing shape and variable pattern of dark spots and sinuous transverse lines. The base of forewing is broad due to expansion of the proximal costa which gives the wing a rectangular shape that is typical of the genus. The ground color is variable, but most Northwest specimens have medium-dark gray color with a slight sheen. The entire basal area, anterior median area, and apex are often darker gray. Some specimens have a silvery or greenish color on the antemedial area, the posterior median area, and the anterior subterminal area, but these forms appear to be more common in the East than in the Pacific Northwest. Short, thin, black lines are present on the bases of the radial and cubital veins, occasionally thicker black at the cubital vein. The basal, antemedial, and postmedial lines are dark gray, double with filling of the gray ground color. The basal line is indistinct, slanted across the costa toward the outer margin when visible. The antemedial line is prominent, usually with a darker gray to black lateral component, sinuous with convex outward segments in the cell and above the posterior margin, slightly slanted from the costa toward the outer margin. The median line is absent. The postmedial line is weaker than the antemedial line, irregular, oriented nearly perpendicular to the fore wing and drawn toward the base on the costa and in the fold. The subterminal line is a pale gray series of ill-defined small spots, most evident due to preceding gray spots that are often fused into a jagged shade. The terminal line is dark gray, often broken by the veins. The fringe is gray. The orbicular spot is a small gray spot. The discal spot is a small dark gray or rust-brown triangle; the cell between the spots is sometimes black. The claviform spot is variable, often absent, evident as a small gray smudge or a long laterally-pointed triangle when visible. The hindwing is light tan-gray, darker gray toward the margin, without darker markings. The head and thorax are light to medium gray with paired dark circles on the anterior thorax and a gray to dark gray tuft on the posterior thorax. The palpi are long with medio-laterally flattened anteriorly-directed distal segments. The male antenna is filiform.

This species can be recognized by its small size, characteristic rectangular wing-shape, powdery gray color, and absence of a dark mark on the basal posterior forewing margin. It is most similar to Nycteola cinereana, a slightly larger moth that has usually has a smoky gray to black dark mark at the posterior wing base. Nycteola frigidana is difficult to distinguish from Nycteola columbiana without dissection. The antemedial line of N. frigidana is usually less sinuous and the dark spots preceding the subterminal line are less prominent but definitive identification requires dissection of the genitalia.

The male genitalia of the three Nycteola species differ in the shape of the distal aedeagus. That of N. frigidana lacks a hook-shaped process, unlike those of both other species.

This species is widely distributed in moist forests or riparian zones across much of North America, including in our region.

Nycteola frigidana is widely distributed in our region at least as far north as central British Columbia. It occurs on both sides of the Cascades but is not found in the driest steppe habitats in the Columbia Basin or the southern parts of Idaho or Oregon. It is relatively uncommon west of the Cascades.

This species occurs across North America. It is most common in the East where it has been found from southern Canada to the Gulf Coast. The range extends across boreal Canada to the Northwest.

This species is a foodplant specialist feeding on Salicaceae including both willows (Salix spp.) and cottonwoods (Populus spp.).

The phenogram of this species is bimodal with peaks in late spring and again in August consistent with the presence of two broods. The first brood is on the wing from April until June, and the second brood flies from mid-July until September. It is nocturnal and comes to lights.