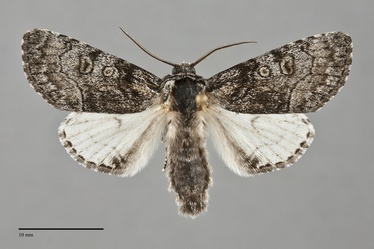 Raphia frater is a common, medium-sized (FW length 16–19 mm), powdery light to charcoal gray moth, sometimes with patches of ochre, that is widely distributed in our area and flies during late spring and summer. It has a pattern of black lines and spots and a white hindwing with black marks at the anal angle and a dark fringe. The forewing is relatively broad and has a rounded apex and smoothly convex lateral margin. The ground color is slightly mottled light to dark gray with a powdery appearance due to a mixture of light and dark scales; scattered yellow or light olive patches distally in many lighter specimens. The wing base and posterior median area are slightly darker in some specimens, contrasting black in others. The lines are black and somewhat indistinct. The antemedial line is double with a dark lateral component. It extends from near the orbicular spot obliquely toward the base of the wing, but bending acutely on vein 1A+2A near the trailing margin, and forming a long loop toward the outer margin that reaches the mid-wing. The median line is dark gray, but strong only on the costa. The postmedial line is double and filled with light gray, but only the inner black component is visible in most specimens. It is smooth or weakly scalloped, drawn medially on the costa, and has a characteristic polyhedron shape around the reniform spot, below which it is bent toward the trailing margin which it joins at a right angle. The subterminal line is irregular, pale gray, and diffuse. It is preceded by a dark gray shade. The terminal line is thin and dark gray. The fringe is the same gray as the adjacent terminal area. The forewing spots are black. The orbicular spot is round and filled with the ground color, usually but not always with a central dark ocellus. The reniform spot is a wide oval or weak kidney shape, almost always with central dark filling. The claviform spot is long, usually reaching the postmedial line, but variable in darkness from distinct to nearly absent. The hindwing is white with darker powdery gray discal spot, postmedial line, and submarginal line. Both of these lines are heaviest at the anal angle where they form a distinct dark mark. The terminal line is a thin black line between the veins. The fringe is gray. The head and thorax are hoary medium gray. The edge of the collar is pale and there is row of black scales on the anterior thorax posterior to the collar. The margins of the tegulae are dark. The surface of the eye is smooth. The male antenna is widely bipectinate.

The genus Raphia was revised in 2014 by Anweiler and Schmidt. They showed that all North American populations are R. frater, and recognized as subspecies most of the regional taxa that were previously considered to be full species. Two of these subspecies occur in the Pacific Northwest. Nominate R. frater frater occurs in the mountains and in forests north of the Columbia Basin and Snake River. Its forewing is dark gray and usually lacks large patches of black or yellowish scales. Raphia frater coloradensis is lighter gray and often has extensive black in the median area. It occurs in the warmer and drier locations than R. f. frater such as in the interior basins and river plains. Some specimens, especially those from along the major river valleys running through the warmer parts of the Northwest, are very light whitish gray with ochre patches and resemble the Southwestern subspecies Raphia frater elbea.

This species is widely distributed in hardwood forests and riparian zones along creeks and rivers throughout most of North America.  In the Pacific Northwest, it is found in coastal rainforests, mixed hardwood forests at low elevations, in quaking aspen forests of the Rocky Mountains, and in the riparian zones along creeks and rivers of desert regions at low elevations east of the Cascades.

Raphia frater is widely distributed in the Pacific Northwest. It is most widespread in forests, including west of the Cascade Mountains, but occurs in riparian areas in steppe regions. It occurs at least as far north as central British Columbia.

This species occurs across North America as far north as southern Canada in the East and from central Manitoba to central British Columbia in the West. It is only absent from peninsular Florida and the driest parts of the Intermountain Region.

This species feeds on both Salicaceae including willows (Salix spp.) and cottonwoods (Populus spp.), and on Betulaceae including alders (Alnus spp.) and birches (Betula spp.) in the Pacific Northwest. Anweiler & Schmidt (2014) report a strong relationship of subspecies R. f. frater with aspen (Populus tremuloides) and subspecies R. f. coloradensis with cottonwood (Populus trichocarpa).

This species has a long flight season from late spring through summer. It has been collected from early May to mid-August in the Northwest. It is nocturnal and comes to lights.