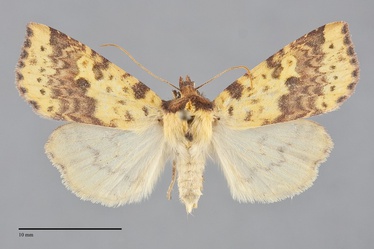 Xanthia tatago is a distinctive, small to medium-sized moth (FW length 13–15 mm) that flies west of the Cascades and in the eastern portion of our area during fall. It has a bright lemon-yellow forewing extensively marked with reddish-purple spots on the costa in the distal median and proximal subterminal areas. The forewing has a pointed and slightly falcate apex. The fringe is checkered yellow and purple. All of the transverse lines, including the median and subterminal lines, are comprised purplish spots. The orbicular spot is marked by two purplish spots. The large figure-eight shaped reniform spot is evident as the yellow filling surrounded by the dark median area, as a small purple in the upper portion and a larger and slightly darker spot in the lower. The claviform spot is absent. The hindwing is light yellow with faint reddish to gray discal spot and patchy postmedial line. The head and collar are orange-brown to purple-brown and the remainder of the thorax is yellow. The male antenna is filiform.

This species can readily be identified by its bright yellow and purplish forewing. Other yellow to orange fall-flying moths lack the spotted pattern of this species.

This species is widely distributed in moist forest and riparian habitats throughout much of North America.  In the Pacific Northwest, it is relatively rare and sporadic, and is mostly confined to riparian zones along creeks and rivers in coastal rainforests and mixed hardwood forests at low elevations west of the Cascades, and to quaking aspen forests at middle to high elevations in the Rocky Mountain region.

This species appears to occur in two different separate areas in our region. A western population occurs in the southern Coast Range and west of the Cascades from south-eastern British Columbia to west-central Oregon. The eastern populations have been collected in the Idaho Panhandle and adjacent British Columbia.

This species is widely distributed across boreal North America from Alaska to the island of Newfoundland. The southern limits of its range are Oregon on the West Coast, Colorado in the Rocky Mountain region, Wisconsin in the Midwest, and Pennsylvania in the East.

This species is a foodplant specialist feeding on willows (Salix spp.) and cottonwoods (Populus spp.) in the Salicaceae.

This species is single-brooded and flies in the fall. All Pacific Northwest records are from September. It is nocturnal and comes to lights.