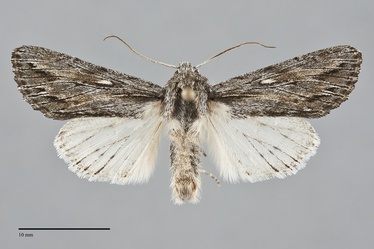 Rhizagrotis albalis is a streaky gray, medium-sized moth (FW length 16–19 mm) that flies in dry sage steppe during late spring and early summer. Its forewings have a white-filled streak for an orbicular spot and irregular black subterminal line, and it has a white hindwing. The forewings are relatively long with weak scalloping of the outer margin. The color is powdery medium-dark gray, streaked due to black veins with adjacent lighter gray. The cell, fold, and distal wing are lightly suffused with brown that is usually lost against the gray. A black dash is surrounds a pale streak. Some specimens have diffuse black along the trailing margin. The terminal area is slightly darker gray, smoother than the rest of the wing. The antemedial, median, and postmedial lines are dark gray, diffuse, faint, and limited to the costa. The diffuse black subterminal line is absent anterior to R5, toothed toward the base on M2 and in the fold anterior to the toothed W-mark to the margin on M3 and CuA1. The subterminal area is paler at the line giving the impression that the subterminal area is elevated above the terminal area. The terminal area is black, interrupted on the veins. The fringe is weakly checkered gray. The orbicular spot is outlined with diffuse black scales and is filled with white. A light gray or brown streak extends through the end of the cell. The reniform spot is barely demarcated by a few black scales or a pale area, or is entirely absent. No claviform spot is evident. The hindwing is white with a dusting of light gray scales near the anterior and outer margins, and darker gray along the veins. The postmedial line is marked by thicker gray on the veins. The head and thorax are powdery gray with darker margins on the tegulae. The male antenna is bead-like.

This species can be identified by the streaked gray forewing with slit-like white orbicular spot and shaded irregular subterminal line that gives the impression that the terminal area is sunken relative to the proximal wing.

This species is widely distributed on dry prairies and in juniper woodlands.  In the Pacific Northwest, it is mostly confined to very dry sagebrush steppe at the lowest elevations in the Columbia Basin and Great Basin.  It is often common in this restricted habitat, particularly in the Alvord Desert of southeastern Oregon.

Rhizagrotis albalis is found in the dry interior of our region. It is found in the Columbia Basin in Washington, most commonly in the western part. It is more widespread in southeastern Oregon and in southern Idaho.

This moth is widely distributed to the south of the Northwest region. It is found from Colorado and the Texas Panhandle to eastern and southern California.

The flight period of R. albalis is spring and early summer. Most of the records from the Pacific Northwest are from May and June. It is nocturnal and comes to lights.