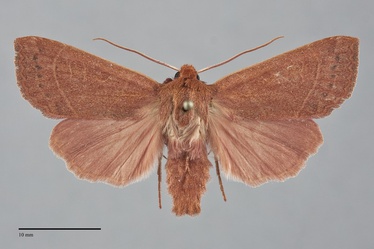 Mesogona rubra is a smooth brick-red to dull pink-brown, medium to large noctuid species (FW length 19–21 mm) that flies in western Oregon and the southern Washington Cascades during late summer and fall. It has faint pale forewing lines and spots and shiny dark red hindwings. Populations from the northern portion of the range have uniform dark red forewings, while those from southwestern Oregon and in California are more variable, with light pink forms in addition to darker specimens. The lines and spots are similar, inconspicuous, a slightly lighter shade of the ground color with a small amount of adjacent gray along the inner portion of the postmedial line, and is a series of spots medial to the subterminal line in a few specimens. The antemedial and postmedial lines are smooth. The antemedial line is strongly angled toward the outer margin with weak convex segments near the wing margins and a slight concave mid-section. The postmedial line forms a convex arc toward the outer margin. The orbicular and reniform spots are large and filled with the ground color. The orbicular spot is a circle and the reniform spot is an upright oval, weak hourglass-shape, or kidney-shape. The hindwings are immaculate shiny dark pinkish-red.

This species can be recognized by the combination of its large size, uniform red to pinkish brown forewing and shiny deep pink hindwing. It is most similar to Mesogona subcuprea, a similarly patterned species with which it flies in eastern Oregon. It usually has golden-brown forewings and coppery hindwings. A rare form M. subcuprea with deep pink forewings is especially similar. The postmedial line of M. rubra is smoothly arched, whereas that of M. subcuprea is angled with intervening straight segments, and the hindwing is distinctly red, while that of M. subcuprea is copper-colored. Red-brown forms of Mesogona olivata, the most common and widespread member of the genus, have dark gray hindwings, unlike those of M. rubra.

Larva is smooth, mottled pink, gray, and brown with a thin white lateral line.  There is a dark brown prothoracic shield behind the head.  It is illustrated by Miller & Hammond (2003).

This species is narrowly endemic to dry open forests and brushlands along the West Coast from southern Washington to central California.  It is common in brushlands with certain species of manzanitas in open sand-dunes near the Pacific Ocean, on rocky ridges and in open clear-cuts of the Coast Range and along the west slope of the Cascades, and in manzanita brushlands and oak woodlands of the Siskiyou region in southwestern Oregon. This species is considered to be management sensitive, and depends on the maintenance of early successional disturbances and clear-cuts to promote the growth of the manzanita foodplants.

This species is predominantly found in western Oregon in the Pacific Northwest where it is found from the high Western Cascades to the Pacific Coast. It is especially common in the Siskiyou Mountains. It is restricted to the southwestern portion of the Cascade Range in Washington (Skamania and Cowlitz Counties).

The range of this species extends south to southern California west of the Sierra Nevada crest.

This species is a foodplant specialist feeding on certain species of manzanitas (Arctostaphylos spp.) in the Ericaceae.  In the Coast Range and along the west slope of the Cascades, the primary larval foodplant is hairy manzanita (A. columbiana).  In the Siskiyou region of southwestern Oregon, gray manzanita (A. canescens) also appears to be an important foodplant.

This species is single-brooded and flies from late summer through the fall. Records from our region are from late August to mid-September. It is nocturnal and comes to lights.