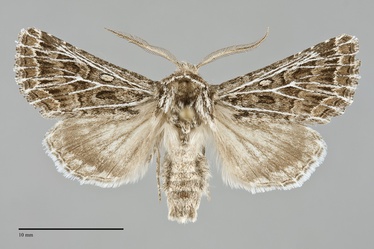 Tholera americana is a common small to medium-sized fall flying noctuid moth (FW length 13 - 17 mm) that flies in dry forests and steppe habitats during the fall. It has brown-gray forewings with white veins. The forewing color is slightly darker in the median area and in the lateral subterminal area abutting the postmedial line. The veins are white, extending into the fringe, although the portions in the subterminal area are black surrounded by pale scales. The antemedial and postmedial lines are black. The former is irregular, and the latter is drawn sharply toward the base at the costa and the rest is very weakly scalloped between the veins and oriented 45 degrees oblique across the wing. The pale subterminal line is smooth, parallel to the outer margin, and preceded by black wedge-shaped marks between the veins. A dark terminal line is present. The orbicular and reniform spots are black and filled with the ground color as well as darker gray centers. A long claviform spot is present the hindwing is pale whitish tan with a solid gray submarginal band and mottled outer margin, dark veins, a very faint discal spot, and postmedial line. The hindwing fringe is white with a light gray basal line. The head and central thorax are powdery brown-gray. The collar and tegulae are striped whitish gray, black, and tan. The eye is covered with fine hairs. The male antenna is strongly bipectinate, appearing feathery to the naked eye.

This moth can be identified without difficulty by its distinctive pattern of white veins except in the subterminal area where they are dark surrounded by pale scales.

This species is widely distributed on dry short-grass prairies of the Great Plains, and in dry forests and rangelands west of the Rocky Mountains.  In the Pacific Northwest, it is common to abundant in dry ponderosa pine forests, juniper woodlands, and on open sagebrush steppe at middle to low elevations east of the Cascades.  It is rare in mountain meadows along the summit of the Cascades at high elevations.  This species is intolerant of wildfires and is mostly absent from habitat recently burned, perhaps because wildfires often kill tussock-type bunchgrasses that may be the larval foodplant.

Tholera americana is found in the dry interior of the Pacific Northwest as far north as southern British Columbia. It is common in the Columbia Basin and surrounding foothills, and also occurs in southeastern Oregon.

This species occurs in northern California and in the Great Plains outside of our region. The global range is not well known to us.

No information is presently available regarding larval foodplants of this species, but all of the closely related species across Eurasia are specialists feeding on grasses (Poaceae).  Based upon the habitat, this species is probably a specialist feeding on native bunchgrasses.

This species is single-brooded and flies in the fall. The records from our region are from late August and September. Adult moths have a vestigial probosis, and are one of the few noctuid moths that probably do not feed as adults. Males are nocturnal and come readily to lights; however, females are rarely collected in light traps.