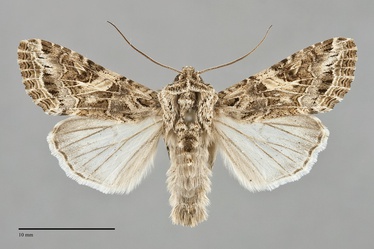 Spodoptera praefica is a medium-sized noctuid moth (FW length 16 - 21 mm) with lighter colored males and darker females that has a "busy" pattern of pale veins and pale markings on the anterior median area and at the wing margins in both sexes. The forewing ground color is medium-dark gray-brown in males, dark gray-brown in females. The antemedial and subterminal areas are bluish gray in males and lead-gray in females. The cubital vein and its proximal branches and all of the veins in the terminal area and fringe are pale ochre. The filling of the orbicular spot, the adjacent cell, and the subjacent median area are similar pale yellowish, most extensively in light males and least prominently in dark females. The basal line has black and gray components and is very irregular. The antemedial line is gray medially and black adjacent to the median area, with lighter filling, and is slightly irregular and oriented slightly obliquely across the wing except the posterior portion which is drawn sharply toward the wing base. The median line is dark gray, thin, and wavy. The postmedial line is similar to the antemedial line except that the black component is medial. It is slightly wavy and is gently excurved toward the outer margin. The subterminal line is pale, strong, and even. It is preceded by pale ochre near the apex and a series of black triangles between the veins across the width of the wing. The orbicular spot is thin and black, filled with light ochre, and oriented obliquely from anteromedial to posterolateral. The reniform spot is black, crescent shaped, with the anterior half lined with ochre with central filling of the ground color and the lower half filled with the dark ground color only but cut across by the light cubital vein. The fringe is strongly checkered with the ground color and the pale ochre color of the veins. The hindwing is pearly light gray in males and darker gray in females, darkest in spring individuals, with gray veins, discal spot, and terminal line. The head and thorax are gray-brown with light barring across the collar and on the margins of the tegulae. The male antenna is bead-like.

Spodoptera praefica can usually be identified by the pattern of light veins and similar light oblique patch across the anteriomedial median area that if formed by the filling of the orbicular spot and adjacent median area. It is most similar in size and pattern to several Anarta species - members of the tribe Hadenini. Like other members of that tribe they have eyes that are covered with fine hairs that are lacking in S. praefica.

This species is widely distributed throughout western North America.  It appears to be migratory, spreading northward from the Southwest each year.  The species is primarily found in disturbed agricultural areas and urban habitats at low elevations both east and west of the Cascades, and frequently builds up into massive epidemic outbreaks in certain crops such as alfalfa.  Adult moths then span out from agricultural areas into surrounding forest and rangeland habitats, but probably do not breed much in more natural, undisturbed habitats.

Spodoptera praefica is common and widespread in our area east of the Cascade Mountains, especially in low-elevation sage steppe and agricultural areas in the Columbia Basin, southern Oregon, and southern Idaho. It also occurs west of the mountains. It is most common in the rain shadow in the Gulf of Georgia region in western Washington.

This species is native to the American West. It occurs from our area and southern Alberta south to Colorado, Utah, and southern California.

This species is a foodplant generalist feeding on many kinds of herbaceous vegetation, and frequently builds up into massive epidemic outbreaks in certain crops such as alfalfa (Medicago sativa) in the Fabaceae.

This species has a very long flight season in our area, first appearing in early spring and flying until fall. Most records are from the late summer in July and August. It is nocturnal and comes to lights.

This species is often a major agricultural pest in various herbaceous crops throughout western North America.