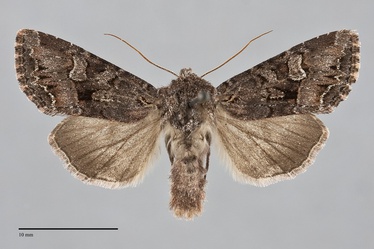 Papestra quadrata is the smallest and most colorful species of Papestra in North America, which is not saying a lot, since the other species are shades or gray and white. It is a medium-sized moth (FW length 15 - 18 mm) with dark brown-gray, often with a slight purplish or reddish tint, with a variable pattern that usually has a blue-gray and red-brown patch between the postmedial and subterminal lines near the anal angle and a black bar between the claviform spot and postmedial line. It flies near timberline during the summer. The forewing is slightly mottled dark gray-brown, usually with a blue-gray band between the postmedial and subterminal line, although this band is often restricted to near the anal angle. The transverse lines are black and double. The antemedial line is more evident than the postmedial line. The latter is filled with blue-gray similar to the adjacent wing. The subterminal line is light whitish gray to light yellow and is irregular and forms a "W" mark to near the outer margin on veins M3 and CuA1. It is preceded by black chevrons between the veins near the level of the inferior cell and dark red-brown near the anal angle. The orbicular and reniform spots are thin and black. The former is circular and is filled with gray and a central ocellus. The reniform spot is kidney- or weakly figure-eight-shaped, variably filled with dark to light gray. The claviform spot is moderate sized. A black bar connects it to the postmedial line in the majority of specimens. The hindwing is dark brown-gray, darker near the margin, with faint darker discal spot and veins. The head and thorax are hoary dark gray to brown-gray with a black transverse band on the collar. The eye is covered with fine hairs. The male antenna is bead-like.

This species can be distinguished from other Papestra species by its warm purple and reddish tint and less black-and-white pattern on the forewing; the other species lack colors other than black and white. Mniotype ducta and Mniotype tenera fly in similar habitats and resemble P. quadrata although they are browner in color. They both lack hair on the eyes that is typical of species in the tribe Hadenini. In addition, they lack blue gray color between the postmedial and subterminal lines and have more extensive black wedge marks medial to the subterminal line than P. quadrata. Lacanobia grandis is also similar, but also tends to be browner and lighter in color than P. quadrata and typically flies at lower elevation. It has a black basal dash that P. quadrata lacks.

This species is geographically variable across North America. Population in eastern Canada are more colorful than those in the West, sporting a broad blue-gray band across the distal forewing and more red-brown color near the reniform spot. The subspecies P. q. ingravis was used for the eastern populations by McCabe (1980) although the type locality of Mamestra ingravis Smith is in the West at Calgary, Alberta.

This species is widely distributed across Canada in moist forest habitats, extending throughout the Rocky Mountains in mixed hardwood-conifer forests, spruce-fir forests, and quaking aspen forests at middle to high elevations.  It is often common in such habitats.

Papestra quadrata is found in the mountains in the northern parts of the Pacific Northwest. It occurs in the northern Cascade Range in Washington, in the Idaho Panhandle, and throughout British Columbia.

This species is found across the subarctic and boreal portions of northern North America from Alaska to Labrador and Newfoundland. The range extends south in the mountains to Colorado in the Rocky Mountains and the Sierra Nevada in California. It is found south to the northern Great Lakes region at mid-Continent and New England further east.

No information is presently available regarding larval foodplants of this species, but it may be a generalist feeding on both hardwoods and herbaceous vegetation like related species.

This species is single brooded and the adults are on the wing during the summer, usually early in the season. Records from our region span mid-May to early August. It is nocturnal and comes to lights.