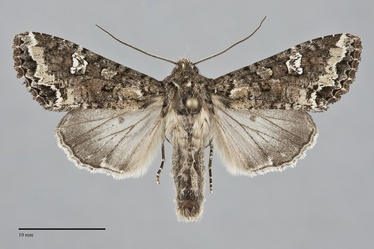 Mamestra configurata is a moderately sized noctuid moth (FW length 16 - 20 mm) that flies in the dry interior of our region from late spring to late fall. It has light greenish and white markings on an olive-gray ground color. The forewing is fairly long and the outer margin is angled to produce a pointed appearance. The ground color is dark brown-gray, usually with an olive tint and often with a dark reddish flush in the median area. The outer part of the subterminal area is even light gray-green except for dark gray at the costa and a patch near the trailing margin. The posterior half of the antemedial area is duller slightly greenish gray. The terminal area is dark gray. A short black basal dash curves anteriorly on the basal line. The basal, antemedial, and postmedial lines are double, gray, and filled with the color of the adjacent wing. All are strongest at the costa and faint elsewhere. The median line is gray. The subterminal line is pale gray to white, irregular in course and thickness but usually evident across the wing; it forms a W-mark on veins M3 and CuA1 that almost reaches the wing margin. The terminal line is black triangles between the veins. The fringe is dark gray-brown, often with yellow lines across it at the ends of the veins. The forewing spots are thin and black. The orbicular spot is oval with a slightly lighter inner line and central filling of the ground color. The reniform spot is large and irregularly kidney-shaped with a broad, inner, white line and darker central filling. The claviform spot is small and filled with the ground. The hindwing is light gray with a slight yellowish sheen, dark gray marginal band, small discal spot, and veins. The hindwing fringe is pale whitish with a light gray base. The head and base of the collar are dark gray brown, with the edge of the collar lighter. The anterior thorax bears a weak dark tuft. The rest of the thorax is variable, usually matching the dominant wing color with tegulae that are slightly lighter centrally with dark margins. The eye surface is covered with fine hairs. The male antenna is bead-like.

This species can be identified by the combination of a predominantly white-filled reniform spot and greenish band proximal to the white subterminal line on a background of olive-gray. Other species that are similar in size with otherwise similar markings lack the light green and olive tint. The most similar species terms of pattern is Melanchra adjuncta a darker, nearly black, moth with white filled reniform spot that flies in forest habitats. It lacks the green area preceding the subterminal line of M. configurata.

This species is widely distributed in moist open habitats throughout much of western North America.  It is usually very rare and sporadic in more natural habitats, but often builds into epidemic outbreaks in agricultural crops and other disturbed habitats at low elevations.  In the Pacific Northwest, it is a major pest in crops of peppermint and alfalfa both east and west of the Cascades.

Mamestra configurata is widely distributed in low to mid elevation habitats south of south-central British Columbia. It is most common at low elevations, paricularly in the Columbia Basin, but also occurs on dry ridges in the Cascade Mountains. It has been found in northern Idaho. It is less common in western Washington but occurs there in the San Juan Islands and Seattle.

This species is widely distributed in western North America. Outside of the Pacific Northwest it occurs east to Saskatchewan and south to central California, Texas, and Mexico (Powell and Opler 2009).

Mamestra configurata is a broad generalist feeding on many kinds of herbaceous vegetation, but appears to prefers herbs in the families Chenopodiaceae, Fabaceae, and Lamiaceae.

The distribution of records of this species has a bimodal distribution indicating the presence of two broods in the Pacific Northwest. It has been collected from mid-May to late September, with peaks in early summer and again in September. It is nocturnal and comes to lights.

This species is a major agricultural pest species in the Pacific Northwest of various herbaceous crops, particularly alfalfa (Medicago sativa) in the Fabaceae and peppermint (Mentha piperita) in the Lamiaceae.