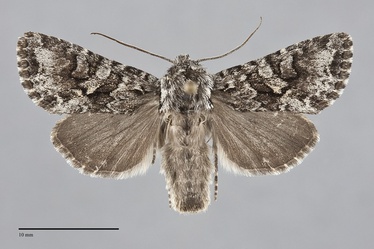 Hada sutrina is a small to medium-sized (FW length 12 - 15 mm), mottled, gray moth that flies in mid-elevation forest to timberline during the summer. It has a pale, gray patch on the central median area abutting the round pale-filled orbicular spot. The forewing ground color is light gray with darker smoky gray in the median area, along the costa medial to the subterminal line, and in the terminal area opposite the cell and in the fold. A thin black basal dash is present. The transverse lines are double and black, although only the component abutting the median area is strong in most specimens. They are filled with light gray. The antemedial line is zig-zagged, and the postmedial line is scalloped. The subterminal line is light gray and variable in prominence. It forms a weak W-mark near the outer margin. The orbicular and renidorm spots are similar, black with lighter gray filling and darker gray central portions. The orbicular spot is variable in size and shape, either round or irregular in shape, and is often open toward the costa. The claviform spot is present and is joined to the postmedial line by a transverse black line. The median area between the three spots and this line is light gray which contrasts with darker gray in the adjacent areas. The hindwing is smoky gray with faintly darker discal spot, veins, and postmedial line and a small pale spot near the anal angle and weakly checkered fringe in most individuals. The head and thorax are grizzled dark and light, with a dark band near the edge of the collar and dark margins on the tegulae. The male antenna is bead-like. The surface of the eye is covered with tiny hairs.

This species is most similar to several Lacinipolia species in size and general pattern, particularly Lacinipolia cuneata. These species do not ordinarily occur together, because L. cuneata flies at lower elevations west of the Coast and Cascade Mountains in late spring and early summer. It has patches of warmly colored scales on the forewing that H. sutrina lack. Many species of Lasionycta occur with H. sutrina and many are similar gray without other colors. None of them has the light gray patch in the central median area above the median dash that is typical of H. sutrina. Some Hadena species, particularly Hadena ectrapela and Hadena caelestis, also resemble H. sutrina. They are more crisply marked and have more distinctive black postmedial lines.

Hada sutrina is found in the mountains of British Columbia and northern and western Washington. It occurs in the High Cascades in Oregon.

This species occurs across the boreal zone of northern North America from Yukon Territory to Labrador and New Brunswick. The range extends south to Oregon along the Pacific Coast and Colorado in the Rocky Mountains.

Hadena sutrina is single-brooded and flies during the summer, usually fairly early in the season. Records from our area are from early June to mid-August. It is nocturnal and comes to light.