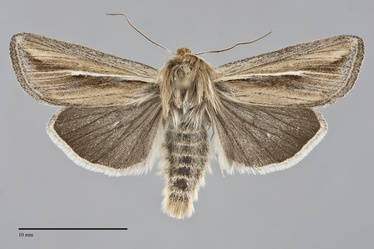 Dargida diffusa, the Wheat Head Armyworm, is a small (FW length 12–15 mm), longitudinally streaked moth with a white cubital vein and dark gray hindwing in our area. It flies in steppe habitats during late spring and early summer. The forewing ground color is typically dark yellow-tan with an olive tint, occasionally lighter dull ochre-yellow, lighter near the apex. The costal and other margins are light blue gray in dark specimens and light tan in lighter ones. A band of olive gray to brown-gray is present near the costa from the base to the end of the cell, curving toward the apex distal to the cell. A triangular area of similar color is present from the end of the cubital vein to the outer margin and apex anterior to vein M3. A thin black dash is present, and a similar black mark is posterior to the distal cubital vein. A black and gray mark resembling a dash on the inner third of the wing near the tip of the basal dash is probably the claviform spot. The cubital vein and the proximal portions of its distal branches M3 and CuA1 are white. The other veins are thin gray except near the trailing margin. Most of the ordinary transverse lines and spots are lacking. A few specimens have a row of black spots at the subterminal line. The terminal line is thin, gray to brown. The fringe is ochre to light gray with several faint striations. A small black spot at the end of the cell represents the reniform spot. The hindwing is dark gray in most Pacific Northwest specimens although some specimens from the eastern part of our region are pale whitish gray to light gray, darker near the margin, with light gray veins, and a white fringe.  The head is tan to yellow brown. The collar is lighter than the forewing with fine transverse striations. The rest of the thorax is slightly darker olive gray to gray brown. The surface of the eye is covered with fine hairs. The male antenna is bead-like to biserrate.

The dark form of this species is predominant in most of our area, outnumbering pale forms 100:1 in the Columbia Basin (P. Landolt, personal communication 2010). Pale forms become more common in the eastern part of our region, blending to entirely pale populations on the Great Plains.

Typical dark Pacific Northwest specimens of D. diffusa are unlikely to be confused with other moths in our area. It is the only species with a combination of streaky forewing with a white cubital vein, dark olive gray forewing color, and dark gray hindwing. Lighter specimens more typical of eastern D. diffusa resembles several species in the genus Leucania in the tribe Leucaniini. They are most similar to Leucania multilinea and Leucania anteroclara, both of which occur in the same parts of our region. Both of these species tend to be larger and stockier than D. diffusa. They have a black dot at the lower end of the cell just anterior to the distal cubital vein that Dargida diffusa lacks.  In addition, both species have at least two black spots along the course of the postmedial line that are lacking in D. diffusa.

The Pacific Northwest populations of D. diffusa were, until recently, considered to be a distinct species, D. terrapictalis (Buckett). This name was synonymized with D. diffusa by Lafontaine & Schmidt (2015), citing lack of differences in the genitalia and barcodes as well as intermediate specimens in western Montana.

This species is common and widely distributed in moist grasslands of riparian areas and in disturbed agricultural habitats at low elevations east of the Cascades. It also occurs uncommonly in xeric sage steppe. This moth is widely distributed in open grasslands throughout much of North America, and is particularly common on the Great Plains where it is often a serious pest of corn and wheat crops.

Dargida diffusa occurs in low dry basins and dry valleys west of the Cascade-Sierra axis in our region. It has not been found in central British Columbia, but occur in the Peace River valley in the north-east part of the province.

Western populations of D. diffusa extend south into eastern California and Nevada.  It is widely distributed in most of eastern North America as far north as southern Canada but excluding the deep south from east Texas to Florida. The range extends further north to Northwest Territories through the western Prairie Provinces. It is also found commonly in the southern Rocky Mountain region, with numerous records in Colorado, New Mexico, and southern Arizona.

This species is a climbing cutworm that feeds on the seedheads of grasses (Poaceae) and prefers tall coarse grasses. It is a pest of cereal crops, including wheat in Washington.

Dargida diffusa is multiple brooded and adults are on the wing during spring and summer. The records from our region are mostly from late spring and early summer, with fewer later in the year from July to early September. It is nocturnal and comes to lights.

This species is often a major agricultural pest species that may damage crops of corn, wheat, and other grains during epidemic outbreaks.