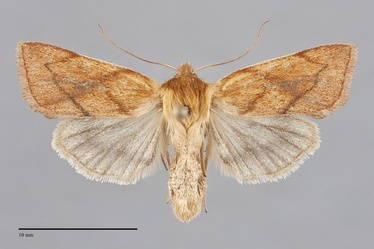 Zosteropoda hirtipes is a small, yellow-brown to light orange-brown moth (FW length 12 - 14 mm) with a distinctive pattern of angulated red-brown lines on the forewing. The forewing has a pointed apex and straight outer margin above the anal angle. The color is light ochre, usually suffused with orange. A dark orange to purplish gray shade extends from the antemedial line to the outer margin along the cubital vein and its branches, darkest along CuA2. The antemedial and postmedial lines are similar, dark orange to gray, single. These lines are nearly parallel. Both are strongly angled toward the outer margin near the costa, bent acutely on the anterior third of the wing, and then strongly angled toward the base to the trailing margin. A slight shade marks the position of the subterminal line near the apex. The spots are limited to a small dark smudge at the reniform spot. The terminal line is thin, dark orange. The fringe is the same color as the ground. The hindwing is light gray with a strong suffusion of dark gray, dark veins, and a diffuse postmedial line. A thin terminal line or series of dots is present at the base of the slightly paler fringe. The head and thorax are evenly colored like the forewing ground. Its eyes that are covered with microscopic hairs. The male antenna is filiform.

It can be identified by the combination of yellow-brown forewing with a slightly pointed apex and the pattern of sharply angled antemedial and postmedial lines. It is unlikely to be confused with any other species in our area. Neleucania praegracilis, found only in eastern Idaho, is similar in size, wing shape, and general color but lacks the characteristic transverse lines.

This species is widely distributed in moist forest habitats throughout much of western North America.  In the Pacific Northwest, it is particularly abundant in coastal rainforests, mixed hardwood forests, moist grasslands, and even urban areas at low elevations west of the Cascades.  It also occurs in mixed hardwood-conifer forests of the Cascades and Rocky Mountain regions at middle elevations, but is usually less common.

Zosteropoda hiritpes is widely distributed in forests in the Pacific Northwest, including west of the Coast and Cascade Ranges. It does not occur in open steppe habitats and is therefore not found in the Columbia Basin, or in low elevation habitats in south-eastern Oregon and southern Idaho.

The range of this species extends south from our region to southern California along the Pacific Coast and to Colorado in the Rocky Mountains. It has been collected in extreme southwestern Alberta near the British Columbia border.

This species is a climbing cutworm that feeds on many kinds of herbaceous vegetation in such families as the Asteraceae, Fabaceae, and Poaceae, but will also feed on hardwood shrubs such as willows (Salix spp.) in the Salicaceae and alders (Alnus spp.) in the Betulaceae.

Zosteropoda hirtipes appears to be single brooded and flies during the summer. It has been collected from early June to early August. Most of our records are from late June and early July.