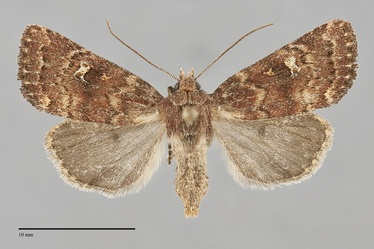 Pseudorthodes irrorata is a common, small (FW length 11 - 14 mm) red-brown moth that is found in wet forests of the western Pacific Northwest. The forewing appears stubby with a rounded outer margin. The forewing is mottled red-brown with a slight orange tint and slight sheen, slighly lighter on the posterior half and near the outer margin. A few specimens are gray-brown with less red color. The basal, antemedial, and postmedial lines are dark red-brown, fairly diffuse, double, with ochre-brown to light red-brown filling. The inner component of the postmedial line is usually dentate, with series of dark spots on the veins along the lateral margin of the line in some specimens. The antemedial line is sinuous, while the postmedial line is weakly convex around the cell and straight to the trailing margin below the spot. A dark median line is usually evident, darkest in the cell. The subterminal line is pale, similar in color to the filling of the other lines, complete across the wing, and slightly irregular. It is preceded by a dark red-brown shade and variable series of black spots or wedges between the veins that are strongest at mid-wing. Pale dots are present on the veins at the base of the red-brown fringe. The orbicular spot is small or absent, usually pale in outline and filled with the same color as the filling of the lines or a few white scales. The reniform spot is bar-like or figure-eight shaped with an incomplete black outline and filling of the ground color, the pale filling of the lines, white scales, or a combination of these colors. The claviform spot is absent. The hindwing is brown-gray, slightly darker gray toward the margin, with very faint discal spot. The fringe is slightly paler, often with a pink or orange cast. The head and thorax are similar to the forewing ground color, with a slight pale edge to the collar. The eye is hairy. The male antenna is filiform.

This species can be identified in most of the Northwest by the combination of small size, rounded wing shape, red-brown color, and white scales in the reniform spot. Pseudorthodes puerilis, a rarely collected species that is restricted to the immediate Pacific Coast in western Oregon, is closely similar. It has a straighter subterminal line, smoother orange-brown color, darker median line, and less conspicous antemedial and postmedial lines than P. irrorata. The tips of the vales of the male genitalia are slightly wider, visible after the scales have been removed with a brush, but this difference is subtle and best appreciated when both species are at hand.

Larva is smooth, mottled brown with undulating pale dorsal and lateral lines.  It is illustrated by Miller & Hammond (2003).

Pseudorthodes irrorata is found west of the crests of the Coast Range and Cascade Mountains as far north as west-central British Columbia. A few records from the east slope of the Cascades exist from Chelan and Kittitas Counties in Washington.

The range of this species extends south through western California.

This species is a generalist feeding on many kinds of hardwoods including snowberry (Symphoricarpos spp.) in the Caprifoliaceae,  Indian plum (Oemleria cerasiformis) in the Rosaceae, and hazelnuts (Corylus spp.) and alders (Alnus spp.) in the Betulaceae.

Pseudorthodes irrorata is single-brooded and flies during the summer. It has been collected from late June to mid-August in the Pacific Northwest. This species is nocturnal and comes to lights.