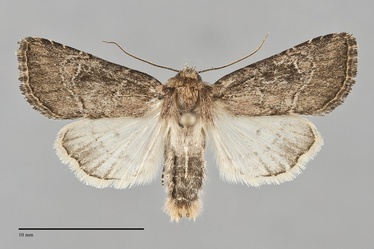 Anhimella contrahens is a small (FW length 12 - 14 mm), brown to gray-brown moth that flies in the dry steppe and forests from spring to early fall. It has pale hindwings, and its forewings have a smoothly curved pale postmedial line, pale-outlined renform spot, and dark filling of the orbicular and reniform spots. The forewing color is variable, uniform dull gray-brown, slightly darker and grayer on the costa and distal to the postmedial line, to light brown or gray-tan. In paler forms the wing is mottled, with dark brown-gray suffusion at the base and in the anterior median area and weaker suffusion in the anterior subterminal area and in the mid-terminal area. The veins are sprinkled with light and dark scales, appearing dark from the postmedial line to the outer margin and darker near the tips of the teeth of the lines in some individuals. The basal and antemedial lines are variable, often indistinct in the dark form but dark, double, and toothed on the veins in the lighter form. The antemedial line is nearly transversely oriented, strongly toothed toward the base on vein 1A+2A above the posterior margin. The median line is usually absent. The postmedial line is double with the medial component much darker than the lateral one, toothed on the veins, filled with similar light color as the other lines, smoothly curved around the reniform spot and diagonal toward the base below the mid-cell. The subterminal line is vague, evident as a transition from light to dark near the apex and obsolete on the posterior wing. It is preceded by a nearly uniform dark shade. The terminal line is dark, interrupted at the veins, followed by a pale line. The fringe is similar to the ground color, weakly checkered in some specimens. The orbicular spot is pale in outline, circular, filled with dark gray-brown. The reniform spot is bar-like, weakly hourglass-shaped, or half-moon shaped, outlined in a paler shade that is widest and lightest on the lateral side and filled with dark gray-brown. No claviform spot is present. The hindwing is yellow-tan off-white with faint gray dusting near the margin and a thin dark terminal line. A faint gray discal spot and postmedial line are evident in some specimens. The hindwing fringe is nearly white. The head and thorax match the forewing color. The eye is covered with fine hairs. The male antenna is bead-like.

This species can usually be recognized, despite the variation in color and degree of mottling, by the small size, dull-color, toothed lines with pale filling and smooth courses across the wing, and pale spots with dark filling. It is most likely to be confused with Anhimella pacifica in the Pacific Northwest. Anhimella pacifica is more likely to have a pale area at and below the apex separating darker gray areas in the anterior subterminal and mid-terminal areas. It also has smoother lines without strong teeth or dark lines on the veins. These species have similar genitalia according to McDunnough's original description of Anhimella pacifica and it is possible that it represents a form of A. contrahens rather than a different species. Both of these moths are distinguished from Anhimella perbrunnea, a species that flies west of  the mountains, by color. It is orange-brown rather than gray-brown. The dark form of A. contrahens is similar to Protorthodes alfkenii, a common fall-flying moth across southern Oregon. It has a darker hindwing than A. contrahens or A. pacifica, a better-defined irregular subterminal line, and an oval orbicular spot with a dark outline, light gray peripheral filling, and a dark ocellus.

Anhimella contrahens is widely distributed across North America. It occurs from Northwest Territories to Nova Scotia in the north to California, Arizona, Colorado and New Jersey.

This species is a generalist feeding on many kinds of herbaceous vegetation, for example dandelions (Taraxacum officinale) in the Asteraceae.

The flight season of A. contrahens is long, with records from late May to mid-September, suggesting that it might be double-brooded. The moth is nocturnal and comes to lights.