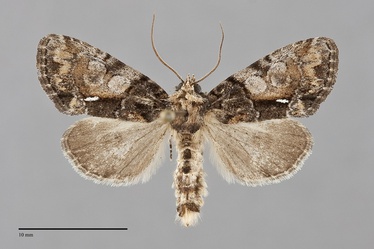 Chytonix palliatricula is a small moth (FW length 13–15 mm) that flies in British Columbia during the summer. It has an olive, light gray, and dark gray forewing with large gray spots and a black and white bar in the fold. The apex is slightly rounded. The anterior forewing is mottled light gray, olive, and tan. The base to the antemedial line and the posterior median area below the fold are dark brown-gray, and the terminal area is mottled dark gray. A bar across the median area in the fold is black with the distal third pure white. The basal and antemedial lines are black and gray. The antemedial line is slightly irregular, strongly angled toward the outer margin and weakly excurved in some specimens. The median line is diffuse gray near the costa and absent elsewhere. The postmedial line is black and tan-gray, strongest across the costa and posterior to vein CuA1, weakly scalloped, broadly excurved on the anterior two-thirds of the wing and slightly angled toward the base near the posterior margin. The subterminal line is gray, diffuse and very irregular, preceded by mottled black and gray in the posterior subterminal area. The terminal line is thin, black. The fringe is mottled gray. The orbicular and reniform spots are weakly outlined in thin black and filled with light gray. The orbicular spot is large and round. The reniform spot is a large oval, weakly constricted mesially. The hindwing is brown-gray with darker margin, discal spot, postmedial line, and a thin terminal line. The fringe is whitish gray with a darker base. The head and collar are light tan with a dark gray edge on the collar. The central thorax is rusty brown and the remainder of the thorax is brown-black. The male antenna is bead-like.

This small species can be identified by its ballooned forewing spots and the black and white bar in the fold. The uncommon form with pure white spots and mid-median area is unmistakable.

This species is common and widely distributed in moist forests throughout much of eastern North America. It has been collected in aspen parkland in British Columbia.

This is a predominantly eastern North America species that is found from southern Canada to the Gulf Coast. The range extends westward into the Great Plains to Nebraska and Oklahoma in the south and Alberta and British Columbia in the north.

No information is presently available regarding larval foodplants of this species, but it probably feeds on grasses (Poaceae) based upon closely related species.

The flight period of Chytonix palliatricula is late spring and summer. Alberta and British Columbia specimens have been collected during May to July. It is nocturnal and comes to lights.