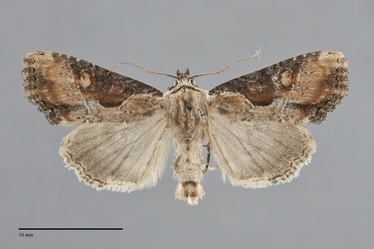 Lateroligia ophiogramma is a small, introduced moth (FW length 13–15 mm) that is spreading along the West Coast. It has a complex forewing pattern with dark gray and brown on the costa and mid-wing to a black median bar in the fold and a brown and black wedge in the posterior subterminal area. A slight concave notch is sometimes evident in the outer margin near the anal angle. The forewing ground color is yellow-tan with a slight olive tint, warmer chestnut brown in the central median area and from the distal subterminal area to the outer margin. This brown color is bordered by a thick black median dash or bar that likely represents a part of the claviform spot and a small patch of light gray from the end of this dash to the postmedial line. The costa is dark blackish gray from the base to the subterminal line and yellow-tan at the apex. A black and brown triangular mark is present in the fold from the subterminal area to the fringe. The adjacent terminal area is dark blue-gray at this mark, and the terminal area opposite the cell is dark gray. The basal, antemedial, and postmedial lines are light gray with filling of the adjacent wing color on the anterior wing and pale whitish gray posterior to the cell. The antemedial line is angled 45° toward the outer margin on the mid-wing, defining the shape of the medial border of the dark anterior area. The postmedial line is toothed with pale and dark spots on the veins at the teeth, is angled 45° toward the base and limits the lateral side of the dark area. The subterminal line is pale orange-tan, sinuous, reaching the outer margin near the apex and on veins M3 and CuA1, preceded by a brown shade from the lower cell to the posterior margin except where it is interrupted by the black mark in the posterior subterminal area. The terminal line is a series of black spots. The fringe is variably patterned with yellow-tan, brown, and dark gray. The oval orbicular spot is partially outlined in black medially and laterally and is filled with dark brown or dark gray. The reniform spot is kidney-shaped, filled with dark gray, dark brown, or a mixture of these colors medially and inferiorly and the ground color elsewhere. The claviform spot is large and it likely forms the black bar in the fold that is described above. The hindwing is light tan-gray with a light suffusion of gray near the margin, similar gray faint postmedial line, veins, and discal spot, and a darker gray terminal line. The hindwing fringe is slightly lighter with a gray median stripe. The head and thorax are gray-tan, lighter at the head and base of the collar, with a black transverse line across the distal collar. The male antenna is filiform.

This species is readily identified by the light yellow-tan forewing with dark gray and chestnut on the anterior portion that ends abruptly in the lower median area at the black bar. The dark wedge and blue-gray mark in the posterior terminal area is also distinctive. Both Mesapamea fractilinea and Xylomoia indirecta are similar in size to L. ophiogramma and have a black median dash. Mesapamea fractilinea has white in the reniform spot and X. indirecta has a more uniform forewing color with dark on the posterior margin across the wing, unlike L. ophiogramma.

In the Pacific Northwest, L. ophiogramma is restricted to wetlands and grassy meadows at low elevations west of the Cascades that are infested with the larval foodplant, the exotic reed canary grass (Phalaris arundinacea, Poaceae).

This moth was probably introduced at Vancouver, Canada and was first reported from the lower Fraser region in the Northwest. It has since spread through western Washington and Oregon at least as far south as the southern Willamette Valley, Oregon. It has also been collected at Cranbrook in southeastern British Columbia.

Lateroligia ophiogramma is a Eurasian moth that was introduced accidentally to North America in the Northeast and Northwest. It has since become established almost continuously across southern Canada and the northern Continental United States. It is not yet known from California but is likely to spread there in the future.

The flight season of this species is summer, beginning in late June and lasting until August. It is nocturnal and comes to light.

This species may have some value as a biological control agent against exotic reed canary grass.