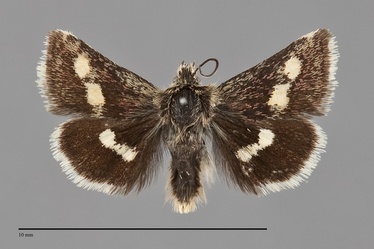 Microhelia angelica is a tiny (FW length 4 - 6 mm), dark, day-flying moth that flies in eastern Oregon and Washington during the spring. It has two pale patches on each forewing. The forewing is blackish gray sprinkled with rose and light yellow scales, lightest in color at the base of the costa and in the terminal area. The edge of the costa is entirely pale near the apex. A band of pale yellowish white in the distal median area is usually separated into small anterior and large posterior patches by the posterior part of the large dark reniform spot which is otherwise fused to the surrounding dark ground. The fringe is dark gray at the apex and anal angle and two-toned with gray and rose basal and white distal components on the mid-wing. The hindwing is black with a white band across the inner third that is usually broken into two similar-sized spots. The hindwing fringe is dark gray basally and white apically at mid-wing, and uniformly dark gray anteriorly and at the anal angle. The head and thorax are hoary gray with a mixture of black and long light yellow hair-like scales. The abdomen is black with a patch of light yellow scales distally. The eye is reduced in size. The male antenna is filiform.

This is one of our smallest moths and can usually be identified by its size and spotted pattern.  Heliothodes diminutivus, another day-flying vernal moth, is similar in color and pattern but slightly larger. Its forewing is usually more vivid red and it has a pale patch in the medial cell that is lacking in M. angelica.

This species is distributed on dry grasslands at low elevations east of the Cascades, and on dry prairies in southwestern Oregon.  It is usually local and sporadic, but may be locally common where it occurs.

Microhelia angelica is found in the foothill regions surrounding the Columbia Basin in Oregon and Washington. It has also been found in the southern Cascade Range in Oregon.

The range of M. angelica extends south through California where it occurs at low and middle elevations. Hardwick (1996) indicates that it flies in the Coast Ranges to Los Angeles and in the Sierra Nevada.

The life history is reported by Hardwick (1996). The larva feeds on flowers and seedheads of Lagophylla ramosissima and possibly also on other species in this genus (Asteraceae).

Adults are strictly diurnal and visit flowers during the day. They fly in spring and early summer, later at higher elevations in California. Most of the Pacific Northwest specimens have been collected in early June.