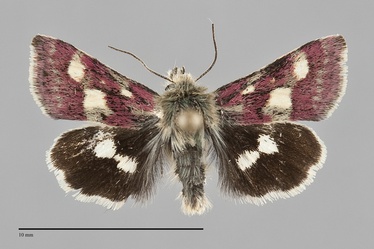 Heliothodes diminutivus is a very small (FW length 7 - 10 mm),day-flying moth that flies in steppe during late spring. It has dark pink to red forewings and black hindwings with cream-colored spots. The forewing of most Northwest populations are dark-rose colored. Olive patches with a mixture of ochre and gray scales are present on the posterior wing base, the posterior median area, on the costa at the positions of the antemedial and postmedial lines, and in the terminal area parallel to the outer margin. The remainder of the median area and a small triangular patch in the medial cell are light yellow. The spots are large and broadly fused to the same color surrounding dark areas. The fringe is dark gray at the apex and anal angle and white with a gray base across the rest of the wing. The hindwing is black with a brassy sheen. A white median area is usually broken into two similar-sized patches where the reniform spot and marginal band touch. Most elements of a normal pattern of lines and spots is lost in the black. The hindwing fringe is white with a dark gray base. The entire body is black with a dense covering of gray-yellow hair-like scales, densest at the thorax. The eye is reduced in size. The male antenna is filiform.

This species is most likely to be confused with Microhelia angelica in its steppe habitat, but is larger, redder, and has a light spot in the medial cell that M. angelica lacks. It is closer in size and pattern to two montane species, Eutricopis nexilis and Schinia persimilis. The former species has a bright pink patches on the ventral wings that H. diminutivus lacks. Schinia persimilis is only found in the Rocky Mountains and associated ranges in our area and can be distinguished by locality alone. It has a third pale spot on the dorsal hindwing medial to the large discal spot that is lacking in H. diminutivus.

This species is widely distributed on dry grasslands at low elevations.  In western Oregon, it is restricted to native prairies.

Heliothodes diminutivus is found around the periphery of the Columbia Basin in Washington and north-central Oregon. It occurs west of the Cascades in Oregon's Willamette Valley as well as in the southwestern part of the state.

The range of this species extends to Baja California through most of California.

The life history is described from Riverside County, California by Hardwick (1996). This population feeds on Lasthenia californica in the Asteraceae. Two other species of Lasthenia, L. glaberrima and L. minor, occur in our area and are potential foodplants for this moth.

Adults are diurnal and visit flowers during the day. They are fond of yellow fleabanes (Erigeron spp.) in Kittitas County, Washington. The flight period is May and early June in our region.