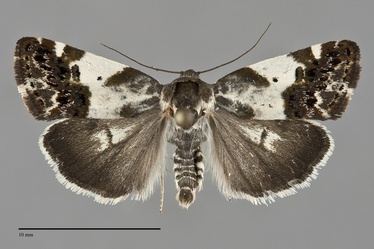 Tarache knowltoni is a small, stubby-winged, black and white moth (FW length 10 - 11 mm) that flies in arid habitats during the summer. It has two white patches along the costal forewing margin and black dots representing the forewing spots. The forewing ground color is white, although the wing is so heavily suffused with dark gray in most specimens that the gray appears to be the ground color. In most specimens, most of the posterior portions of the basal and median areas are dark gray leaving only a rhomboid patch of white in the anterior median area that contains the black punctate orbicular spot. Some specimens have more extensive white, especially in the posterior median area. All specimens also have a small triangular white spot on the costa at the postmedial line. The color of the distal wing is dark brownish gray. The postmedial line and a series of spots medial to the subterminal line are comprised of metallic black scales. The subterminal line is white and irregular. The terminal line is a series of black spots. The fringe is dark with one or two pale spots, largest at the fold. The orbicular spot is a small black spot and the reniform is a black bar. The hindwing is usually white at the base, often completely surrounded by dark gray. The gray along the margin forms a well-defined marginal band. The veins and discal spot are also dark. The hindwing fringe is gray basally and white distally. The head and body are dark gray, with pale margins on the tegulae. The male antenna is filiform.

This species is most similar to Tarache flavipennis. The hindwing of this species is ochre yellow with dark margins, not white as in T. knowltoni. Other similar sized members of the subfamily Acontiinae have more pale color on the forewings than these species.

This species may be a northern subspecies of the Californian T. flavipennis.  It is widely distributed in moist grasslands and open meadows throughout much of western North America at both low and high elevations, but it avoids particularly dry grasslands and sagebrush steppe east of the Cascades.  In the Willamette Valley west of the Cascades, it appears to be confined to the original native prairie, and may be nearly extinct.  However, it is common in moist meadows along the east slope of the Cascades and in the Blue Mountains.

Tarache knowltoni is found in scattered sites in the Pacific Northwest. It has been collected most commonly in the Yakima River valley in the Columbia Basin of Washington but is also known from the Idaho Panhandle and the Blue Mountains of Oregon.

This species appears to be uncommon throughout most of its range. It has only been found in Utah, southwestern Colorado, and northern California outside of the Pacific Northwest based on records on the Moth Photographers Group web site and records from the USNM (nearctica.com).

No information is presently available regarding larval foodplants of this species, but it probably feeds on Malvaceae such as Sidalcea species like related species.

This species has been collected from spring until fall in our area, but most records are from the middle of the summer from June until mid-August. The adults are diurnal and visit flowers during the day. The also fly at night and have been collected at lights.