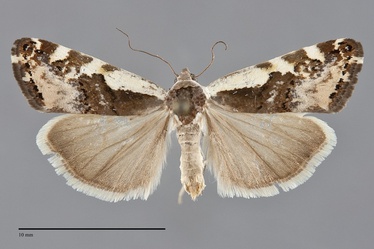 Tarache augustipennis is a small moth (FW length 11–13 mm) that flies in the eastern portion of our area in late summer. It has a forewing with a cream-colored costa, solid brown-gray posterior two-thirds, and a mottled distal area. The forewing is relatively long and narrow with a long rounded apex, longer in males than in females. The ground color is cream, with dark brown-gray on the posterior half from the base to the postmedial line. The distal wing is slightly darker with metallic gray suffusion on the lighter portions and a rectangular brown-gray spot at the costa in the subterminal area. The fringe is dark brown-gray with cream patches on the margin opposite the cell and at the base at mid-wing. The basal line is absent. The posterior antemedial line is faintly darker than the adjacent gray. The anterior antemedial and median lines are variable, either both absent or both evident as a dark patch on the costa. The posterior median line is pale gray in some specimens. The postmedial line is a series of black spots on the posterior half of the wing and next to the reniform spot; the anterior portion is similar to the more basal lines in that it is absent or present as a patch on the costa. The jagged subterminal line is evident as an interface between gray in the subterminal area and cream in the terminal area. The terminal line is a series of small black spots between the veins. The reniform is partially surrounded by the white of the anterior wing. Its outline is incomplete, black, and it is filled with brown-gray. The orbicular and claviform spots are absent. The hindwing is pale brownish gray with slightly darker discal spot, veins, and margin and a two-toned pale fringe. The head is brown. The base of the collar is pale and the rest of the thorax is gray-brown. The male antenna is filiform.

The forms of this species with and without dark markings on the costa were considered to be distinct species until recently (Schmidt & Anweiler 2010). The form with an unmarked costa was called Tarache flavicosta.

This species is common and widely distributed on arid grasslands and rangelands throughout much of western North America, and is particularly common on the short-grass prairies of the Great Plains. It has been collected in the juniper-steppe ecotone in southern Idaho.

Tarache augustipennis has been collected in south-eastern Idaho near the border with Utah in our region. Single records for south-eastern British Columbia and south-central Oregon exist in the USNM (nearctica.com).

This species is predominantly a species of the Great Plains and the Southwest. It is found from central Alberta and the central Dakotas south to Utah, central Arizona, southern New Mexico, and western and central Texas (nearctica.com). Isolated records from the Lake Tahoe region of eastern California are shown on the Moths Photographers Group web site.

This species feeds on Malvaceae such as Sphaeralcea species that are common on dry grasslands.

Tarache augustipennis is single brooded and flies in August in our region. It is nocturnal and comes to lights.