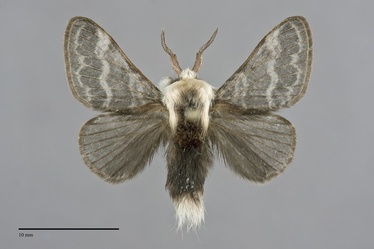 Tolype laricis is a small to medium-sized moth (FW length 11–12 mm in males; 16 mm in females) that flies in British Columbia during the fall. It has smoky, blackish-gray forewings with rounded margins. The forewings of males are dark gray with slightly irregular light gray transverse lines. The antemedial and postmedial lines are double and oriented nearly perpendicular to the trailing margin. The subterminal line is nearly parallel to the outer margin, drawn slightly basad opposite the cell and on the veins near the anal angle. The fringe is dark gray, with a thin light gray terminal line at the base. No spots are present. The hindwing is black. The head, collar and tegulae and the tip of the abdomen vary from charcoal gray to pale whitish, with a patch of curly metallic scales on the central thorax. Females (not shown) are larger and much paler than the males with pale brownish gray wings marked with pale veins and whitish lines. The antennae of both sexes are bipectinate, much broader in males than in females.

This species occurs in northern wet or boggy coniferous forests with larch.

Tolype laricis has been found in central British Columbia as far south as Vernon in the northern Okanagan region. The range of this species is described as extending west to eastern British Columbia by Franclemont (l973) but no specific records were cited in this work.

This species ranges across boreal North America from Nova Scotia to British Columbia. It occurs south to South Carolina in the East and the southern Great Lakes region in the Midwest.

This species is a foodplant specialist feeding on various conifers such as larch (Larix spp.) in the Pinaceae.

Tolype laricis is single brooded with adults on the wing from late July through the fall.  The exact flight period is unknown because only literature records were examined for this site.  It has a strong buzzing flight typical of the family Lasiocampidae and does not feed as an adult.  Tolype laricis is nocturnal and is attracted strongly to light.