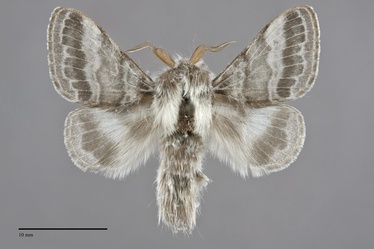 Tolype distincta is a round-winged, white and gray, fall-flying moth with a tuft of curly dark metallic scales on the thorax and a body covered with long, white scales. It ranges from small to large, with small males and larger females (FW length 13–15 in males; 19–21 mm in females). The ground color is variable, light to medium-dark gray, with white to light gray veins. The transverse lines are white in light specimens and gray in darker ones. The antemedial and postmedial lines are double, diffuse and wavy, and oriented nearly perpendicular to the trailing margin. The subterminal line is single, arched parallel to the outer margin, except for a slightly concave segment opposite the cell and irregularity near the anal angle. The fringe is gray, with a white-to-light gray tip and terminal line near the base. The spots are absent. The hindwing is much smaller than the forewing in both sexes and is nearly round. It is pale whitish gray with darker gray at the base and a darker gray submarginal band that spares the outer edge. The hindwing fringe is variable, from white to gray. The thorax is usually silver-gray in males and white in females, with an elongate central patch of raised curly shiny brown-gray scales that are characteristic of the genus. The antenna is broadly bipectinate in males and weakly bipectinate with short thin branches in females.

This species can be identified by its fall flight, gray and white pattern, and the unusual patch of metallic scales on the thorax. This scale tuft serves to distinguish this species from all moths other than Tolype laricis, which only occurs in eastern British Columbia. It is a smaller and darker species than T. distincta and has uniformly dark hindwings.

Tolype distincta French, type locality Colorado, and Tolype dayi Blackmore, type locality Quamichan Lake, Duncan, Vancouver Island, have been treated as separate species, including by Franclemont (1973) in the Moths of North America North of Mexico series. He was vague about the differentiating features, stating on page 42 "I have not found a satisfactory way to separate distincta from dayi." Furthermore, he notes that while specimens from British Columbia and Washington are clearly associated with T. dayi, he states on page 44 that those from Montana "seem to exhibit a synthesis of dayi and distincta characteristics." There is clinal variation of Tolype phenotypes throughout our region without consistent distinguishing features to suggest that there is more than one species. Therefore, we suggest that all Pacific Northwest populations are a single variable species—Tolype distincta—and consider Tolype dayi to be a synonym of Tolype distincta.

Larva is covered with soft, fuzzy white hairs, the color is dark gray and brown with a transverse black line with orange spots just behind the thoracic area. It is illustrated by Miller and Hammond (2003).

This species is common to abundant in moist coniferous forests at all elevations throughout most of the Pacific Northwest.

Tolype distincta is found in forested areas throughout the Pacific Northwest as far north as southern British Columbia in the vicinity of Kamloops. It does not occur in treeless arid steppe environments such as most of the Columbia Basin and southeastern Oregon. It appears to be absent from far eastern Idaho; no specimens were found during collecting in Cassia, Franklin, and Bear Lake Counties during early September, 2012.

The range of this species extends south in the Rocky Mountains to Colorado and Arizona.  It also occurs in California, although the southern limit of the range given in Franclemont (1973) is unclear.

Adults have a rapid buzzing flight like other members of the family.  They do not feed as adults.  Pacific Northwest records extend from late July until November, with most collection records from mid-August through September.  They are nocturnal and come readily to light.