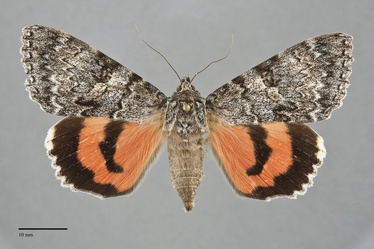 Catocala semirelicta is a large underwing moth (FW length 31 - 36 mm) that is widely distributed in forests in our region and flies during the summer and fall. It has variable mottled, powdery blue-gray forewings and banded orange-red hindwings. The forewing margin is scalloped and usually perpendicular to the posterior margin. The color is medium-dark to dark blue-gray, usually powdery due to a suffusion of black scales. Occasional specimens are strongly contrasting white, light gray, and black, including black shading along the fold region. The blue color is especially prominent in the basal and median areas. Pale whitish gray patches are present in the medial cell, the anterolateral median area, and in the mid-subterminal area. The basal and antemedial lines are black, double, and filled with light blue-gray. The antemedial line has darker lateral component, is moderately irregular and oriented oblique lateral from the costa. The median line is diffuse dark gray, evident on the costa and surrounding the reniform spot. The postmedial line is usually dark gray or black medially and pale gray laterally, less often double with stronger medial and lighter lateral components, evenly undulating or serrate across most of the wing and with a single dark tooth toward the base near vein 1A+2A above the trailing margin. The subterminal line is pale blue-gray medially and dark gray laterally, diffuse, evenly serrate, slightly bent toward the base near the costa and parallel to the outer margin below the cell. The terminal line is a series of short black lines and light gray or pale tan spots between the veins. The fringe is gray with longitudinal stripes and a pale edge. The reniform spot is dark gray, D-shaped with irregular lateral margin, filled with gray peripherally and dark gray centrally. The subreniform spot is dark gray or black with powdery whitish gray filling. The hindwing is dark orange-red with black median and marginal bands. The median band ends bluntly without reaching the inner margin. The hindwing fringe is white with a pink or peach inner row anteriorly and light gray checkering of the base on the mid-wing. The head and thorax are powdery gray to dark gray with darker gray transverse lines on the collar and the edges of the tegulae. The male antenna is filiform.

This species can usually be identified by its large size, powdery blue-gray wing color with evenly toothed postmedial line, pale zig-zag subterminal line, and red hindwing ground color. It is most likely to be confused with Catocala unijuga, another large species. C. unijuga has a slightly less blue-tinted forewing that usually has a more pointed apex than that of C. semirelicta. Its hindwing is more orange rather than red as in C. semirelicta, best appreciated when specimens are compared side-by-side, and the median band extends further toward the inner margin. Catocala semirelicta is also similar to Catocala californica. The forewing of this species is usually darker gray than C. semirelicta, often with a brown tint and more uniform appearance. Its hindwing is slightly darker and less orange than that of C. semirelicta, but this difference is more subtle than the differences in color between C. semirelicta and C. unijuga.

This species is widely distributed in moist forests across Canada and through western North America.  In the Pacific Northwest, it is common and widely distributed in riparian habitats along creeks and rivers at both low elevations west and east of the Cascades, and in higher elevation montane habitats.  It particularly favors cottonwood forests.

Catocala semirelicta is widespread in forests throughout the Pacific Northwest at least as far north as west-central British Columbia. It occurs west of the Cascades and in isolated mountains ranges in the Basin and Range Ecoregions of southern Oregon and Idaho.

This species is found across North America with a large range in the West and a more restricted one in the East. It is restricted to a narrow north-south band near the Canada-United States border east of the Canadian Prairie provinces. It is more widely distributed in the West where it occurs from north-central Alberta to New Mexico in the Rocky Mountains, and then west to the Pacific through the Northwest and California.

This species is a foodplant specialist feeding on Salicaceae including both willows (Salix spp.) and cottonwoods (Populus spp.).  It appears to show a preference for larger cottonwoods.

The flight period of this moth is late summer and fall, beginning in July in our region. It is nocturnal and is attracted to lights and sugar baits.