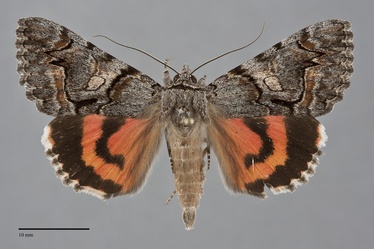 Catocala ophelia is a fairly small Catocala (FW length 20 - 25 mm) from mixed oak forests in southwestern Oregon. It has blue-gray and brown forewings and banded red and black hindwings. The forewing is relatively broad, is shaped like a right triangle, and has a scalloped outer margin. The ground color of the median area is medium-dark blue-gray, lighter near the anterior postmedial line and whitish between the antemedial line, spots, and costa. The terminal area is mottled darker blue-gray and gray. Bands of dark wood brown are present in the antemedial area next to the antemedial line and fills the subterminal area. A diffuse black basal dash is present lateral to the basal line in a minority of specimens; most lack a basal dash. The basal, antemedial, and postmedial lines are black. The basal line is shore, located on the costa near the base. The antemedial line is slightly irregular, slightly excurved and oblique from anteromedial to posterolateral with an inward tooth on 1A+2A near the trailing margin. The diffuse dark median line is evident near the costa. The postmedial line is thick, forming two sharp teeth toward the outer margin below veins M1 and M2, then nearly perpendicular to the trailing margin to just above 1A+2A where it forms a long straight hairpin loop or single bar toward the base that nearly touches the antemedial line. The subterminal line is pale gray medially and gray laterally, evenly toothed, parallel to the anterior postmedial line to the anterior tooth, then nearly parallel to the outer margin to the posterior margin. The terminal line is a series of black and light gray dots between veins. The fringe is concolorous with the terminal area. The reniform spot is relatively obscure, outlined in pale blue-gray and filled with red-brown. A large subreniform spot is prominent, black filled with pale whitish gray. The hindwing ground color is light red with slightly irregular black median and marginal bands; the former ends bluntly before reaching the inner margin. The hindwing fringe is white to pale yellow with a red basal line and dark gray checkering or suffusion on the mid-wing. The head and thorax are powdery blue-gray with a dark brown-gray collar with a dark edge. The male antenna is filiform.

This species is distinctive due to its small size, gray forewing with black and brown bands, pale subreniform spot, and red and black hindwing. It is unlikely to be confused with other Catocala species in our area. It is smaller than Catocala aholibah, another oak-feeder with dark forewings and red hindwings. Catocala ophelia is larger and darker than Catocala verrilliana, a small oak-feeding underwing moth with a light blue-gray forewing and an orange-red and black hindwing.

This species is narrowly endemic to oak woodlands and mixed hardwood forests with evergreen oaks in California and southwest Oregon.  In Oregon, it is frequent to common in mixed hardwood-conifer forests at middle elevations in the mountains.  This species is considered to be management sensitive, depending on evergreen oaks as a larval foodplant.

Catocala ophelia is restricted to southwestern Oregon in our region.

The range of this species includes California, occurring across the state in the north and along the coast to the border with Mexico. It is also found in Arizona and southern Utah.

This species is a foodplant specialist feeding on evergreen oaks (Quercus spp.) in the Fagaceae.  In Oregon, the primary larval foodplant is canyon live oak (Q. chrysolepis).

Adults of this species are on the wing in late summer, with records from August and September in the Pacific Northwest. It is nocturnal and comes to light and sugar bait.