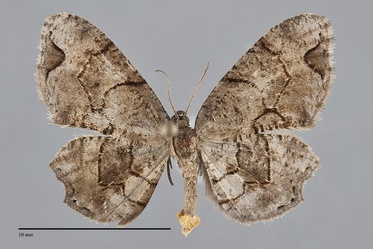 Callizzia amorata is a small (FW length 10–11 mm), broad-winged, light-bodied moth that resembles inchworm moths (family Geometridae) more than other moths on this site (as of 2011). The hindwing margin is scalloped with a focal concave outer contour opposite the cell. The ground color of both fore- and hindwings is finely mottled light clay-gray to tan-gray with patches of darker gray. The thin black angled antemedial and postmedial lines are present on both fore- and hindwings, and are joined by a similar thickness bar across the lower median area on the forewing. The most distinctive mark on the forewing is located along the margin below the apex. It is an inwardly pointed or sine-curve shaped rusty patch bordered medially by black. The fringes of both fore- and hindwings match the ground color, and are weakly checkered in some specimens. The thorax is gray, matching the forewing color. The male antenna is filiform.

This species can be identified by the combination of small size, broad wings with "cookie-cutter" concave margins to the hindwing, and the rusty brown and black marking on the subapical distal forewing. It is most likely to be taken for an inchworm moth because of its small size and broad forewings.

The larva is smooth, dark gray-green dorsally and contrasting white ventrally.  It is illustrated by Powell and Opler (2009).

This species is widely distributed across North America in moist forest habitats.  In the Pacific Northwest, it is locally common in coastal rainforests and mixed hardwood forests west of the Cascades, usually at low elevations. It is less common in the Rocky Mountain region. It is found in boreal forest in British Columbia.

Callizzia amorata is found in mesic forests throughout most of the Pacific Northwest. It ranges north to northern British Columbia. The range extends to southern Oregon west of the Cascades and to southeastern Idaho in the Rocky Mountains. It appears to be rare along the east slope of the Cascades in Washington and Oregon and is absent from the dry Basin and Range Ecoregions.

This species is broadly distributed in North America. In the East is is found from Nova Scotia to Florida, west to New Mexico. It is found in coastal northern California to the south of our region.

This species is a foodplant specialist feeding on honeysuckles (Lonicera spp.) and snowberry (Symphoricarpos spp.) in the Caprifoliaceae. Covell (1984) states that the young larvae live communally in webs.

The adults are on the wing during late spring and summer, most commonly in June and July. They fly at night and are attracted to light. This moth has a distinctive resting posture with the wings held to the side flat against the substrate and the hindwings pleated against the abdomen.