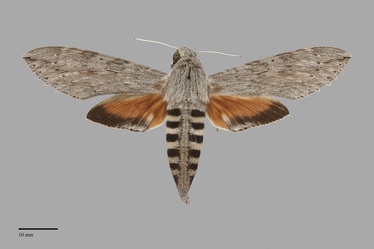 Errinyis ello is a very large sphinx moth (FW length 38–41 mm; wingspan 7.5–8.5 cm) that occurs as a very rare migrant in the Pacific Northwest. It has streaky light gray-tan or gray-brown forewings and bright red-orange hindwings. The forewing is very narrow, tapering to a sharp point at the apex, and has a toothed outer margin.  It is sexually dimorphic.  Males have gray finely streaked forewings with a longitudinal black stripe that extends from the mid-base to the apex, and a dark brown or black stripe on the median dorsal thorax.  Females (illustrated) have both uniformly light gray forewings and thorax without conspicuous dark markings.  The hindwings are bright red-orange or burnt orange with dark gray to black outer margin and pale gray near the anal angle.  The head and thorax are gray-tan.  The dorsal abdomen is marked by black and gray bands on each segment that are bisected by a gray median band.  The antenna is whitish and club-like.

The combination of very large size, streaky gray forewing, rusty hindwing, and black-and-gray striped abdomen will serve to identify this species in our area.  It is unlikely to be confused with any other moth.

Larvae are distinctive due to a red and black eyespot on the dorsum of the first abdominal segment.  Many color variations can be found including the common green as well as tan, purplish, and brown-gray mottled.  The larvae have a caudal horn that becomes progressively smaller in each instar.

This species takes advantage of a large variety of habitats in tropical and subtropical lowlands.  It can be found in the understory of heavily wooded areas in south Florida and the Rio Grande Valley of Texas and on dry exposed hillsides in southeastern Arizona.  It is not a permanent resident in the Pacific Northwest and appears here as a long-distance stray.

This rare vagrant has been collected in southwestern Oregon.

Breeding population of Erinnyis ello are limited to the southern part of the continental United States, including peninsular Florida, southern Texas, southern California, and southern Arizona.

This species is a foodplant specialist feeding on various spurges (Euphorbiaceae).

The number of generations is variable by region.  In southern Arizona adults are univoltine and appear in summer with the monsoon rains.  The single Northwest individual was found in mid-September.