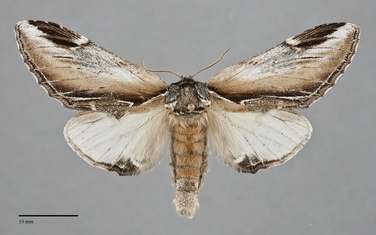 This is a complex of two species (Pheosia rimosa and P. californica) that occur in the region and that until recently were lumped together as a single species, P. rimosa. We need to re-examine specimens at the various regional collections before we can implement this taxonomic split and in the meantime will refer to them all as P. "californica". These are common large to very large prominent moths (FW length 21–26 mm in males; 25–33 in females) with light and dark geographic forms in the Pacific Northwest.  The forewing is long with a rounded apex and appears slightly curved forward because the trailing margin of the hindwing is convex and the costa is slightly concave near the base.  The margin is slightly scalloped and there is a small dark flange along the posterior margin.  In the light forms of P. "californica", the ground color of the anterior wing is white and the posterior wing and margin is tan.  Black markings include a longitudinal mark from the wing base near the posterior margin that curves anteriorly along the outer margin, and a series of strong dashes on and near the distal costa that are strongest near the apex.  The normal lines and spots are nearly obsolete.  Usually only the anterior postmedial line is visible.  The hindwing is white with dark gray marks on the slightly expanded anal angle.  In the dark form, found west of the Cascade Crest, most of the white portions of the forewing are dark gray, and the tan color of the nominate subspecies is replaced by darker brown. More extensive black marks are present between the veins, and the scalloped postmedial line is often visible as a pale line due to the darker color of the adjacent wing.  The hindwing is similar to that of the nominate subspecies in pattern but is darker smoky gray rather than white. The thorax is gray with mild posterior tufting. The antennae are bipectinate, moderately wide in males and narrow in females.

The larva is smooth, blue-gray, green, or light brown, with a row of white-rimmed black spots along each side and a short caudal horn. It may also have an orange lateral stripe.  It is illustrated by Powell & Opler (2009) and Miller et al. (2018).

P. "californica" is common and widely distributed across much of North America in riparian habitats.  In the Pacific Northwest, it is common in coastal rainforests and mixed hardwood forests at low to middle elevations west of the Cascades, particularly in riparian zones along creeks and rivers.  East of the Cascades, it is common in mixed conifer-hardwood forests at middle to high elevations in the Rocky Mountain region, particularly in quaking aspen forests, but extends to riparian habitats in lowland desert regions at low elevations.

P. "californica" is a foodplant specialist feeding on Salicaceae, including both willows (Salix spp.) and cottonwoods or quaking aspen (Populus spp.).

The adults have a long flight season and have been found from mid April until late August.  The bimodal phenogram with peaks in the spring and later summer suggests two broods in our area.  Adults are nocturnal and come to light.  As with other prominent moths the adults do not feed.