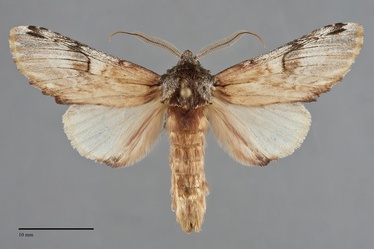 This species is can be identified by its color and black bar-shaped discal spot. It is most likely to be confused with Oedemasia semirufescens, but this species is pale blue-gray and pinkish brown and lacks the black discal spot of I. pallida.

This species is usually uncommon in most areas, but is widely distributed in forests throughout the Pacific Northwest.  These habitats include coastal rainforests, mixed hardwood forests west of the Cascades, and mixed hardwood-conifer forests at higher elevations in the Cascades, Blue Mountains, and Rocky Mountain region.

Ianassa pallida is widely distributed in forests of the Pacific Northwest, including along the Pacific Coast. It does not occur in xeric steppe habitats.

This species occurs throughout much of western North America as far north as southern Canada.

No information is currently available regarding larval foodplants, but it probably feeds on hardwoods based on closely related species.

Ianassa pallida appears to be single brooded and is most commonly found in July. Pacific Northwest collection records span late May to early September. It is nocturnal and comes to light. As with other prominent moths the adults do not feed.